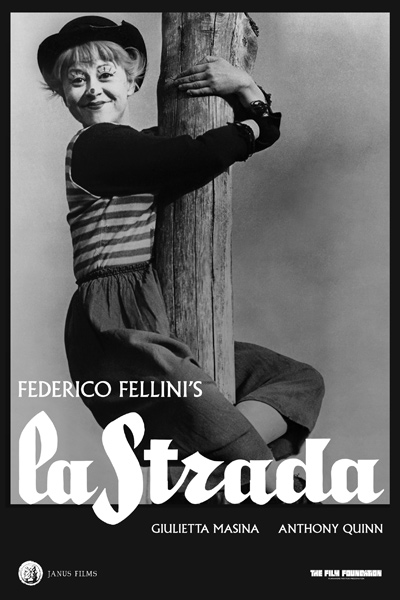 Support the IFS by screening titles straight from independent distributors who routinely provide us with interesting movies. By clicking "watch now" below you'll be able to watch a theatrical release and the distributor will then split the proceeds 50/50 with the IFS, which in turn helps buy us time while we wait for the green light to return to Muenzinger Auditorium.
There has never been a face quite like that of Giulietta Masina. Her husband, the legendary Federico Fellini, directs her as Gelsomina in La Strada, the film that launched them both to international stardom. Gelsomina is sold by her mother into the employ of Zampanò (Anthony Quinn), a brutal strongman in a traveling circus. When Zampanò encounters an old rival in highwire artist the Fool (Richard Basehart), his fury is provoked to its breaking point. With La Strada Fellini left behind the familiar signposts of Italian neorealism for a poetic fable of love and cruelty, evoking brilliant performances and winning the hearts of audiences and critics worldwide.