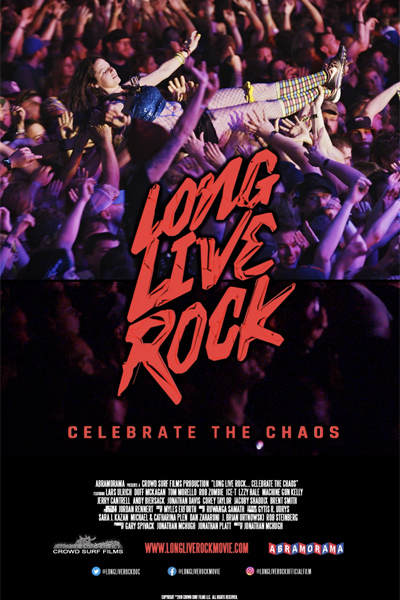 Support the IFS by screening titles straight from independent distributors who routinely provide us with interesting movies. By clicking "watch now" below you'll be able to watch a theatrical release and the distributor will then split the proceeds 50/50 with the IFS, which in turn helps buy us time while we wait for the green light to return to Muenzinger Auditorium.
Long Live Rock…Celebrate The Chaos is a deep dive into the culture of hard rock music. This genre, beloved by its millions of fans, is often misunderstood and maligned by media and the music industry. In intimate interviews, titans of rock discuss the genre and the special relationship they have with their diehard audience. Featuring members of Metallica, Guns N’ Roses, Slipknot, Korn, Rob Zombie, Five Finger Death Punch, Rage Against The Machine, Greta Van Fleet, Halestorm, Machine Gun Kelly, Shinedown and many more, Long Live Rock was filmed over the last few years at various US rock festivals, following passionate fans as they take time out from their everyday lives to commune with their ‘rock families.’