The Devil Came on Horseback 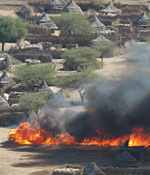 "The Devil Came on Horseback" is a documentary about the human-rights crisis in Darfur. It's also about our response to the human-rights crisis in Darfur -- not just the West as a whole, but you and me and the guy down the hall. You don't want to think about another faraway ethnic cleansing? Fine; here are pictures. You still don't want to think about it? All right -- why?

If that sounds like a self-righteous guilt trip, the movie's anything but. Rather, filmmakers Annie Sundberg and Ricki Stern have built an engrossing, thought-provoking moral position paper on the back of one Brian Steidle, an ex-Marine who found himself working as a cease-fire monitor in Sudan in early 2004.

Steidle got the job via the Internet and quickly realized how deeply he was in over his head. The cease-fire between the Muslim government forces in the north of the country and the black animist revolutionaries in the south held everywhere but in the primarily Muslim western province of Darfur, where government-backed militias known as "janjaweed" -- "the devil on a horse" -- massacred entire villages, man, woman, and child.

"Devil" wants very much to poke audiences in their hardened sensitivities, aware many of us are too busy shutting out the body count in Iraq to think about a preventable human-rights catastrophe in northern Africa. The film shows chief prosecutor Luis Moreno Ocampo of the International Criminal Court in The Hague readying a case against the Sudanese government that has yet to bear real fruit. Steidle is seen visiting genocide memorials in Rwanda and crumbling in exhausted tears over how little we've learned.

"We've said 'Never again' again and again and again," says a weary Steidle at a rally on the National Mall. "And here we are again." (T. Burr, Boston Globe)

The Devil Came on Horseback