Eat ham and jam and Spam a lot! 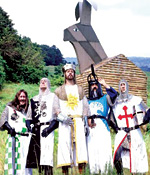 It's Monty Python's most-loved and oft-quoted film about the hilarious tale of King Arthur. And when you complain about your email getting clogged by spam, remember this: the people who coined the term where thinking of this film. That's how powerful it is: it influences the future! Directed by Terry Gilliam and Terry Jones.