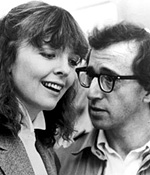 Manhattan – Woody surprises himself with one of his most successful and critically acclaimed films to date,. Arguably his best, his love-triangle tale focuses on Issac David, a divorced New Yorker currently dating a high-schooler which brings himself to look for love in the mistress of his best friend instead. His affair soon spins the complexities of love and its consequences of choice.