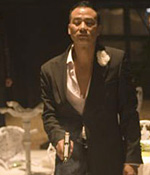 It is 1998, and in three days Macao is due to be handed back into Chinese control - but before the Portuguese colony can move on to its new future, there are debts to be paid, deals to be made, bridges to be built - or burnt. Gangsters from outside are circling to move in on expiring tenancies, and contract hitmen are making a killing.

One-time Hong Kong gangster Wo (Nick Cheung) has spent years on the run after a failed attempt to assassinate his boss Fey (Simon Yam), but has now resurfaced in Macao to put down new roots with his wife Jin (Josie Ho) and their baby. Boss Fey, meanwhile, is planning to move his powerbase to post-transition Macao, and wants revenge on his old enemy - so he sends two pairs of his best hitmen to take out Wo, relishing the fact that all four killers used to run with Wo back in the day.

By turns unabashedly sentimental and claustrophobically tense, slyly comic and explosively violent, "Exiled" repeatedly wrongfoots the viewer's expectations. A furious gunfight ends with all the participants laughing together over dinner (cooked in a bullet-dented pot); getaway cars need to be push-started; and although the conclusion never seems anything less than inevitable, wild coincidence (or is it destiny?) drives the plot towards it by the most unpredictable of routes.

Following the likes of "Infernal Affairs," "One Night in Mongkok" and To's own "Election," "Exiled" offers further proof that post-accession Hong Kong is home to the world's best action-oriented policiers. Boasting an ensemble cast of the island's finest character actors, superbly choreographed gunplay (in very confined spaces), a painterly cool engendered by precise framing and filtered colours, a sombre guitar-based soundtrack (by Guy Zerafa), and the sort of pace that other films would kill to achieve, "Exiled" is unquestionably cracking cinema. Add to this the audacious portrayal of Macao's handover as a transition from one group of crooks to another, and you have a moody crime drama that doubles as a revolutionary political allegory - ringing the changes on China's evolving reunification even as it longs for a future that will return to the noblest values of the past. (A. Bitel, Musicomh.com)