All in This Tea

With Les Blank in Person 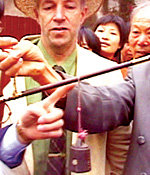 Les Blank's first digitally shot documentary features world-renowned tea expert David Hoffman and his search to understand and preserve ancient methods of growing, preserving, and enjoying fine teas, for the benefit of his and future generations.

The usual delight in unfamiliar tastes, traditions and personalities that has always marked Les Blank's docus is undimmed in his first digitally shot feature. Co-directed with editor Gina Leibrecht and shot over nearly a decade, "All This in Tea" offers a genial portrait of U.S. tea importer David Lee Hoffman as he scours rural China for the finest non-factory-processed leaves. Growing sense of urgency and concern around sustainable agriculture, organic farming, China's growing economic power and other relevant issues could win the ingratiating pic entree to fest, broadcast and educational outlets, with fringe arthouse exposure also possible.

Hoffman became a tea aficionado during a youthful decade spent backpacking mostly in Asia, where tea isn't just sustenance but a key element in various social, ceremonial and religious practices. Hoffman has difficulty not only finding the few farmers who still make hand-crafted teas the old way, sans pesticides, but also convincing the bureaucrats to let him buy directly from the source, rather than going through factories.

En route, the pic detours to Hoffman's rural home in Northern California, where he practices what he preaches by growing his own vegetables. Several Stateside entrepreneurs and experts comment on the booming market for boutique teas and coffees, analyzing the brew's more rarefied varieties with the same rhapsodic seriousness many bring to wine appreciation.

A glance at the plant's gastronomic history notes some mid-19th-century skullduggery in which a British spy stole plants and seeds in an attempt to break China's production monopoly. Few types could be grown on outside soil (even just across the border in India), resulting in the very limited perception of tea flavors long held by most Westerners.

Blank's usual eye for the telling or humorous detail is in evidence. Lensing and editorial contributions are spot-on; soundtrack of mostly traditional Chinese instrumentals adds yet more character.

All in This Tea