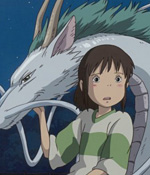 In 2002, Disney released the U.S. version of Japanese animator Hayao Miyazaki's story of a girl's plunge into a world of eccentric spirits and difficult challenges. SPIRITED AWAY cemented Miyazaki's reputation as a master of this artform.

The title “Spirited Away” could refer to what Disney has done on a corporate level to the revered Japanese animation director Hayao Miyazaki's epic and marvelous new anime fantasy. The picture is being promoted as Disney's “Spirited Away,” although seeing just 10 minutes of this English version of a hugely popular Japanese film will quickly disabuse any discerning viewer of the notion that it is a Disney creation. The towering, lost dreaminess at the heart of the film is an unmistakable obsession of this director. Actually, rather than Disney's “Spirited Away,” the movie could better be considered Mr. Miyazaki's “Through the Looking Glass.”

The picture's theme is dislocation. Chihiro (voice of Daveigh Chase), moving with her parents to a new neighborhood, is pouty about leaving her old friends and school behind. Her father's attempt to take a shortcut to their new town leads the family to a settlement that looks like what he calls an abandoned theme park: acres of beautifully designed kiosks, buildings and statues.

Easily frightened and quick to voice her unhappiness, Chihiro wanders off while her parents gorge on a lunch from an unattended food stand. She encounters an apparition who warns her that she and her family have to leave before the sun goes down. But when she runs back to alert her mother and father, they've been turned into hogs, bursting out of their casual Friday garb and gobbling up everything before them.

Mr. Miyazaki's specialty is taking a primal wish of kids, transporting them to a fantasyland and then marooning them there. No one else conjures the phantasmagoric and shifting morality of dreams -- that fascinating and frightening aspect of having something that seems to represent good become evil -- in the way this master Japanese animator does.

For Chihiro each strange creature has the physical -- and inevitably psychological -- threat of a shark. Just because we know that they don't have a mean bone in their bodies doesn't make them seem any less dangerous to her. She doesn't know whom or what to trust. The initially friendly Haku, a boy with magical powers (Jason Marsden), advises Chihiro on navigating the new world. He helps her get a job at a bathhouse both staffed and frequented by strange creatures, including a bubbling, mountainous pile of foul-smelling liquid called the Stink God. But Haku becomes brusque, and Chihiro is warned that he's a sneak and cannot be trusted.

Keep in mind that much of the contradictory truth comes from Yubaba (Suzanne Pleshette), the witchy bathhouse owner whose greed is surpassed in size only by her head. Her grating voice alone could probably peel the filth from the Stink God. Haku's unwarranted shifts of personality reflect what distinguishes Mr. Miyazaki from Disney, or any other American animator. His movies are as much about moodiness as mood, and the prospect of animated figures' not being what they seem -- either spiritually or physically -- heightens the tension. “Spirited Away,” which opens nationwide today, deepens Chihiro's uncertainty by not defining the creatures that inhabit this spirit world in simple good-guy bad-guy terms, making them capricious and unintentionally treacherous.

Using his standard threat of the loss of self is a way that Mr. Miyazaki brings a sense of peril to Chihiro. During her adventures a little piece of Chihiro is chipped away at every turn. She's renamed by Yubaba and learns later that if she doesn't hide her real name away she'll lose her identity forever. And her whininess gradually disappears as she learns responsibility.

No big point is made of it, though fans of Mr. Miyazaki's “Princess Mononoke,” which was promoted on a much larger scale, may be let down by the minor-chord fluidity of this film.“Spirited Away” is a marriage between the power of “Mononoke” and the lively pop-pop-pop of his film “My Friend Totoro.”

These storytelling subtleties were absorbed by John Lasseter of Pixar -- the man behind the “Toy Story” movies -- who also served as executive producer for this English-dubbed version. Undoubtedly something was lost in the translation; watching the parade of wild things flutter, stomp and crawl though the bathhouse will make you wonder what each represents in Japanese mythology. (At one point it's as if every item in the Japanese Sanrio line of toys has come to life.) The cultural weight that the picture bears partly explains why this was the biggest hit ever in Japan, outpacing “Titanic.”

The beauty of the animation, a skillful blend of hand-painted foreground and well-placed computer background, works to generate the storytelling. It makes all the characters distinct in appearance and keeps them from looking as if they're drifting a couple of inches above the ground.

What the title really applies to is the director himself. After his struggle to get the career-capping “Mononoke” to the screen, Mr. Miyazaki retired but is said to have been sparked back to the drawing board after meeting a girl who inspired Chihiro. This child should accompany the director to Los Angeles for the Oscar nomination “Spirited Away” will probably receive. The world deserves a glimpse at the slacker-sprite behind so much magic.