Documentary About State Secrets Since the Cold War 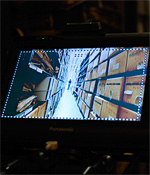 Secrecy spells out the post-WWII history of state secrets in the U.S., elucidating the conflicts that result when government wants to preserve national security through secrecy while the fourth estate wants to ensure institutional transparency and accountability. Both sides of the argument for keeping state secrets are explored by the filmmakers, Harvard professors Peter Galison and Robb Moss (The Same River Twice), who tear a page from documentarian Errol Morris' stylebook in their interweaving of archival photos and footage, black-and-white animated sequences, and interviews of military personnel, a former CIA station chief, a former National Security Administration official, lawyers for Guantanamo Bay inmates, journalists, and other stakeholders in this critical debate.

Few Americans would argue with Winston Churchill's dictum: "In wartime, truth is so precious that she should always be attended by a bodyguard of lies." But the culture of secrecy that has developed within the Bush/Cheney White House has taken that admonition to dangerous extremes. The inherent tension that exists between the public's right to know and the government's need for confidentiality in the service of national security is the subject of Secrecy, a powerful documentary by Harvard professors Peter Galison and Robb Moss. In addition to historical footage, the film employs a series of pulsating animated drawings, with the white ink against the black background injecting an appropriately unsettling, even sinister tone. Arguments on both sides of the debate are presented, although the filmmakers have a clear point of view: that the current level of secrecy is harmful. Most chilling is the former CIA station chief who defends secrecy on the grounds that it "allows us the latitude of action to use methods that are not necessarily consistent with our values as a nation."