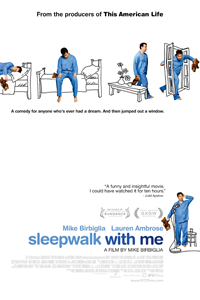 Much of the best comedy derives from personal pain, and comic turned filmmaker MikeBirbigliadeftly transposes his stand-up routine to the big screen. In its world premiere here at Sundance, Sleepwalk With Me charmed a morning packed-house, not an easy room to play.

As a great comic elder once said: “A relationship is like a shark. Either it moves forward or it dies.” That's what long-term relationship couple Matt (Birbiglia) and Abby (Lauren Ambrose) have on their hands. He's a comedian/bartender with, at most, 11 minutes of tolerable material. She a go-getter who sees them as a married couple, but doesn't want to confront her commitment-phobic partner.

Matt's small-club routine is stale until he stumbles into telling his own relationship woes: The audience howls, and he expands his act. Now, he actually plays to appreciative crowds, but the home front is not amused. His controlling, physician Dad (James Rebhorn) hectors him to confront a serious sleep disorder and get on with a real life, while his dithering mother (Carol Kane) pushes the marriage program.

Birbiglia's deft, breezy treatment of a serious relationship disorder, as well as a serious neurological sleeping problem, jells wonderfully. The comedy percolates in large part because of the likable lead performances of Birbiglia, whose easy self-deprecating ways overcoats Matt's character flaws. As his steadfast partner, Ambrose is a zesty antidote, who swallows her pain with perky resolve.

The parents are a hilarity: Carol Kane is a hoot as Matt's nattering mother and Rebhorn is amusingly cantankerous as the domineering dad.

Credit to co-writers Birbiglia and Ira Glassfor the frothy distillation of one man's pain. Birbiglia and co-directorSeth Barrishkeep the comedy from tilting into pathos, while maintaining a steady hand on the complex relationship issues which inspire the mirth.