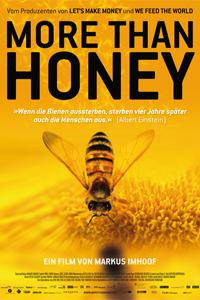 For several years, the phrase "colony collapse disorder" has been used to describe the precipitous and unexplained decline in the bee population, and the recent pesticide-caused die-off of thousands of bees in a Wilsonville parking lot has drawn local attention to the fragility of the industrious insects. In his documentary "More Than Honey," Swiss filmmaker Markus Imhoof explores the phenomenon within the context of a global, integrated agriculture that relies on pollinating bees for a significant chunk of the world's food.

With a family history in beekeeping, Imhoof approaches the busiest of bugs, and those who deal in them, with empathy and foreknowledge. He interviews apiarists and other experts in Europe, America, China and Australia, showing how things like rental hives transported cross-country in tractor trailers work, and how trying to use humans to pollinate groves by hand simply doesn't. We need the bees.

Imhoof also uses some of the best microphotography since 1996's "Microcosmos" to provide a window to the world of the bee. In hives, in flight, even in battle with voracious (and vaguely vampiric) mite infestations, they are miniature wonders. With a combination of anthropomorphic traits (hierarchical society, expressive dances) and arthropod enigma, it's no wonder they hold such fascination for us. The movie uses an oft-repeated quote from Albert Einstein stating that if bees were to disappear, humanity would follow suit in four years. A simple Internet search turns up significant doubt as to whether the great physicist (not biologist, in any case) said such a thing. A little more attention to fact checking would have given the other scientific assertions in "More Than Honey" added weight, but even so this remains a fascinating, sometimes visually stunning, call to action.