The Last Day of Summer 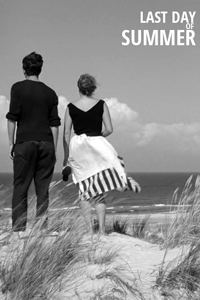 Historians of cinema long had a problem with classifying Tadeusz Konwicki’s directorial debut. The mature artistic form and the theme of post-war trauma present in the background of the story supported the idea that the film could be considered a work of the Polish Film School. However, the poetics of The Last Day of Summer (Ostatni Dzień Lata) bring to mind rather the cinema of the New Wave, which may surprise, considering that the film premiered in 1958, a year before the “founding” works of the French movement. By creating a minimalist, plotless story focused on observing two young people, Konwicki became the precursor of modern film narration. He was aided in this by pure chance: the asceticism of The Last Day of Summer was, to a certain extent, a result of its creators having a very limited budget.

The action takes place somewhere on a beach on the Baltic Sea. In the almost empty space two strangers meet. He (Jan Machulski) is 28 years old, she (Irena Laskowska) is a little older but doesn’t want to disclose her precise age. At first the woman responds with aggression to the boy’s courtship, but over time a closer relationship is formed between them. It turns out that the man has been following the woman for two weeks and has fallen in love with her over this time. The woman doesn’t want to get involved in a relationship of any sort and she wants to go back home from her vacation on the same day.

The limiting of the film’s space to one deserted beach enables the viewer to focus solely on the relationship between the characters. Konwicki “cleans” everything unnecessary from the film - he rids it of sociopolitical themes and leaves only subtle psychology based on ambiguities. We don’t know the names of the heroes nor their pasts, the dialogues are sparse and the plot exists only partially, but from their gestures, glances and fragmentary sentences we may glean some information. We learn about the reasons for the woman's emotional reserve - it has its source in the war and is linked to the loss of the woman’s loved one. Konwicki doesn’t refer the big picture as he tries to cope with wartime trauma, instead he analyses how the war influenced the delicate matter of human feelings, how it increased mutual distrust and put a strain on interpersonal relationships. The director builds the atmosphere of uneasiness, which constantly accompanies game of love/eroticism, using exceptionally modest means of expression – he makes use, for instance, of the “apocalyptic” motif of jet planes circling above the beach. The key to the interpretation of the film is the fragment of Tadeusz Różewicz’s work entitled Voices (Głosy), which is quoted in the beginning:

Konwicki’s film may be considered a portrait of the wounded post-war generation, but the understanding of the film shouldn’t be limited only to the historical dimension. Above all, The Last Day of Summer is still a current story about the conflict between the need for closeness and the fear of other people.

The uniqueness of Konwicki’s work lies in its minimalism and formal simplicity. The core of the film crew consisted only of a few people: two aspiring actors, the director and the cinematographer. As The Last Day of Summer speaks chiefly through images, the cinematographer Jan Laskowski played a very important role in the process of the films’ realization. He is mentioned in the introduction as co-director of the film. The feelings of the heroes – loneliness, anxiety, desire for contact – were conveyed to a large extent by the pathetic fallacy of the landscapes and by meaningful frame compositions.

Despite its undeniable artistic values, The Last Day of Summer was at first received quite coldly in Poland. Only after the film won an award at the festival in Venice did critics start to revise their evaluations. Konwicki’s work eventually became part of the canon of Polish cinema.

The Last Day of Summer