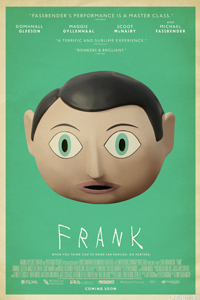 Straight from Planet Fruitcake comes Frank, a funny, first-class satire on the pop music business in which an avante garde band headed by a lead singer with a huge fake head he never takes off (Michael Fassbender) wrestles with the prospect of becoming popular.

Domhnall Gleeson plays Jon, the marginally talented keyboardist who falls into the band and is immediately embraced by Frank, while being at loggerheads with singer Clara (Maggie Gyllenhall). His questionable artistic influence propels the band from the backwoods of Ireland to online success and a major gig in Texas.

And, for the record, Fassbender - who appears sans fake head in the final reel - did not use a double at any point during the shoot (apart from the stunt scenes, obviously). Some might say that's a waste of an A-list talent, but it's more a measure of the extent some A-list actors will go to for their art. — 3AW 693