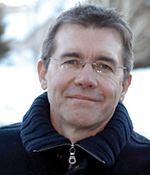 Stephen Gyllenhaal has had a productive career in the film industry as a writer, director, producer, and actor. He has directed several films (WATERLAND, and HoMEGRoWN) and popoular television shows such as TWiN PEAKS, FELiCiTY, THE SHiELD. in preparation for his poetry reading tomorrow, the iFS will host a screening of Gyllenhaal clips, co-sponsored by Cu-Boulder Community Relations and Many Mountains Moving.

Co-promoted by CU-Boulder Community Relations and Many Mountains Moving