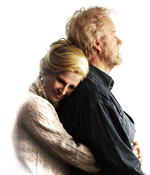 "Away From Her" is the lyrical screenplay adaptation of celebrated author Alice Munro's short story "The Bear Came Over the Mountain." A beautifully moving love story that deals with memory and the circuitous, unnamable paths of a long marriage. Married for almost 50 years, Grant (Gordon Pinsent) and Fiona's (Julie Christie) commitment to each other appears unwavering, and their everyday life is full of tenderness and humor. This serenity is broken only by the occasional, carefully restrained reference to the past, giving a sense that this marriage may not always have been such a fairy tale. This tendency of Fiona's to make such references, along with her increasingly evident memory loss, creates a tension that is usually brushed off casually by both of them. As the lapses become more obvious and dramatic, it is no longer possible for either of them to ignore the fact that Fiona is suffering from Alzheimer's disease.