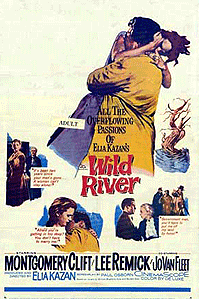 Set in the 1930‘s, Elia Kazan spins a story of romance and human dignity beneath the construction of a dam in this strong but unbiased commentary on progress and social upheavel.


"Never mind the grainy opening footage of flooded streets; the river is the tamest thing in Elia Kazan’s terminally neglected 1960 melodrama. That newsreel snippet sets up the social-issue background: Chuck Glover (Clift), New Deal idealogue from the Tennessee Valley Authority, is overseeing the much-needed building of a dam. But the minute he steps onto the condemned property of cantankerous matriarch Ella Garth (Van Fleet) and sees her widowed daughter-in-law (Remick), all bets on stark realism are off. Battle lines are drawn—tradition versus progress, individual rights versus government mandates, black versus white. But the movie is primarily concerned with one question: When will this handsome Fed and his hillbilly hottie explode from too much repressed lust?"