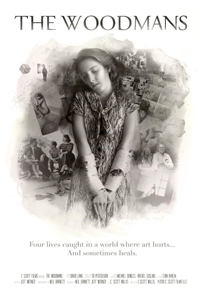 JUST ADDED: Our Saturday, April 9th, screening of THE WOODMANS will probably be compromised by a slew of concurrent activities that same night (Bill Maher, CU Spring Game, etc.) and parking could be tricy. To accommodate people who would like to see THE WOODMANS, but would rather not deal with Saturday parking issues, we're adding a matinee show of THE WOODMANS on Sunday, April 10th at 3pm.

The Woodmans is an astute and thrilling ride comparing what it takes to be an artist, and what it takes to be a great artist. Small wonder that it won the Best New York Documentary Award at this year's Tribeca Film Festival because it explores trite subjects of art and depression in refreshingly honest ways.

In the first few minutes of the film we meet George and Betty Woodman and begin to learn about their struggle to be artists and their raising of their two children Charles and Francesca. As soon as she's introduced the story splits and becomes a story about Francesca and her life and art juxtaposed with George and Betty's life and art. With only the aid of journals, a few choice interviews and cherry picked journal entries we learn about the dramatic Francesca and know her fate long before it is revealed to us in the film. Still it's fascinating to watch and we want to see more and more of her amazing photographs.

While he's quick to point out that it's not a commissioned film, director C. Scott Willis was the first to gain unfettered access to the family. For that, George and Betty deserve praise. Their openness to discussing their emotions on camera, and our empathy with them, give the audience a reason to care. And our attitudes about them change as the movie goes on. We learn to appreciate them as fallible people who have terribly mixed feelings about their daughter's remarkable success as well as the pain she has caused them. The most interesting, Francesca, we get to know through her work (primarily nude self-portraits). Love her or hate her, she's never compromised. Seeing her work and then seeing the work of her parents (who have achieve their own artistic recognition but never at the level of Francesca) forces the audience to compare the artwork. And it's not a fun comparison if you're George and Betty. There's a "Greek tragedy" in these emotions - watching George and Betty live in a world in which they can never measure up to their own offspring, but continue trying (or is it exploiting) somehow. All this makes for fantastic viewing, but that's all we're doing as the audience, viewing, not interacting, and the camera never lets us forget that fact.

If anything, the film doesn't go far enough toward the verité style. Unlike most others, I don't hold a film like 'The Cove' on a pedestal at all, and I truly had a more emotional connection with this movie. Like the difference between Francesca's art and her parent's art, Willis self-censors himself delivering a film that stops short of fully embracing the bizarre, and thus stopping short of its potential. 'The Woodmans' is a nice piece of photojournalism, but not the high-art as we've seen in documentaries like Jonathan Caouette's 'Tarnation'.

Stylistic choices can be debated all day, and while I don't agree with Willis' choice to leave the camera in the shadows, the film is still a powerful movie that will stay with you as a viewer. It provokes questions more than answers, as a good documentary should do. If you are a museum person or a deep thinker, and if 'The Woodmans' gets the release it should (who knows) be sure not to miss this gem of a documentary on the insanity of the artist.