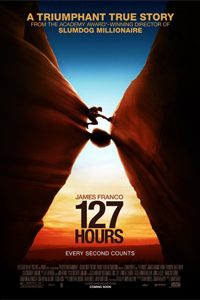 127 Hours seems headed for a bright, awards-laden future. It’s possible that this highly praised movie will win an Oscar nomination for best picture. It’s an equally good bet that the movie’s director, Danny Boyle, will be nominated for best director.

And while we’re on the subject of awards: It’s reasonable to speculate that James Franco, the movie’s star, will find himself on Oscar’s short list for best performance by an actor in a lead role, and it wouldn’t be shocking if cinematographers Enrique Chediak and Anthony Dod Mantle receive Oscar nominations, as well.

You get the idea. 127 Hours already has struck gold with critics and industry insiders.

All of this is fairly amazing considering that Boyle’s tense and involving movie is a bit of stunt, a celebration of the will to survive and of the stunning, high-definition clarity of its own imagery.

For those who don’t know, a recap is in order: 127 Hours tells the real-life story of Aron Ralston (Franco), a brash young Coloradan who got his arm pinned by a boulder while taking a solo hike in Utah. Isolated in a narrow canyon and facing death, Ralston — who wrote a 2004 autobiography called Between A Rock and Hard Place — struggled to find ways to free himself.

Ralston’s story owes its prominence — then and now — to the radical way in which he saved his life. When all else failed, Ralston freed himself by cutting off his lower right arm with a dull knife.

No question a movie such as 127 Hours poses extreme technical challenges for a filmmaker. How do you dramatize a story involving only one location, a spot from which the main character can’t move?

Boyle (Slumdog Millionaire) solves the problem with a facile camera, bravura editing, fast-paced depictions of Ralston’s delirious fantasies, split-screen images, occasional flashbacks and dizzying shots of the canyon in which Ralston is trapped. Boyle also provides just enough backstory to establish Ralston as a young man whose journey involves an arc of sorts: Ralston makes the transition from arrogant self-assurance to humbled acknowledgement of his need for others.

Ralston underwent an awful ordeal. He tried to drink water that trickled down to him from a thunderstorm. In desperation, he drank his own urine. He talked to a video camera, sometimes addressing his mother in an attempt to assuage the guilt he felt about not having bothered to return her call before leaving on his ill-fated excursion.

Of course, Boyle makes you squirm when the BIG MOMENT arrives. At some festival screenings a few people reportedly passed out. That strikes me as a bit of an over-reaction, but it is difficult to watch someone cut off an arm. I never approached loss of consciousness, but I did wince.

After some heady opening sequences, Ralston leaves the rest of humanity behind. Before striking out by himself, though, he meets two young women who also are hiking. Ralston takes them to a place where they can suspend themselves between two high rock walls before dropping into a pool of blue water.

It’s a key sequence because it tells us that Aron, played by Franco with giddy but eroding confidence, regards the natural world as a kind of personal playground; it’s this view that ultimately betrays him.

Boyle takes us through what feels like the quickest 127 hours in movie history. He’s never boring, but he also never lets us forget that there’s a creative talent working (and sometime overworking) this material. That’s why 127 Hours represents an intriguing but strange sort of achievement: Although it’s set in the middle of nowhere, Boyle’s movie can seem like one of the busiest, most charged-up dramas of the year.