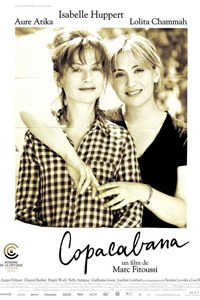 How do the French do it? How do they manage to craft such gratifying, character driven dramatic comedies with such guileless grace, and yes, it must be said, joie de vivre? Last year Summer Hours stole our hearts, and now taking a trip to Copacabana promises to have the same effect. This case is perhaps less of a mystery, as the luminous Isabelle Huppert takes centre stage with an ebullient performance as the adventurous, harebrained single mother Babou. Acting alongside her real-life daughter, Lolita Chammah, as the solidly sensible Esmeralda, Huppert's Babou captivates and infuriates in turn.

A relic of the 60s with her beehive dos and loud clothing, Babou is a force of nature. Never one to hold down a job, her flighty antics have worn threadbare for Esmeralda, who wants nothing more than to settle into the institution of marriage with her boyfriend. The eternal free-spirit Babou is of course aghast, and insult is added to injury when Esmeralda intimates that her mother should not attend the wedding, lest she be saddled with half of the bill. Indignant, Babou drives to Belgium and takes up a job spruiking for time-share real estate agents where she finds surprising success.

Writer/director Marc Fitoussi rounds out his film with a well-drawn supporting cast. Each provide a window into the many facets of Babou's personality, and now sensitive to her daughter's scorn, she gains insight into the more unsightly truths about herself. In this way Copacabana feels like a coming-of-age drama, one in which Huppert — best known for her unflinching dramatic chops in films like The Piano Teacher and Claire Denis' recent White Material — brings all her masterful skills to bear in the subtly of Babou's transformation.

Fun, affirming and supremely joyful, Copacabana is a superb reminder that life is about the journey, not the destination.