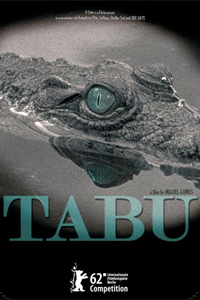 Beautifully shot, brilliantly directed and superbly written, this is a hugely rewarding, achingly emotional Portuguese drama that's unlike anything else you'll see this year. Unmissable.

Directed by Miguel Gomes (who won a director's prize at the recent Berlin Film Festival), Tabu is a Portuguese drama that begins with a silent movie style prologue about an explorer in the African jungle coming across a melancholic crocodile. It turns out that this film is being watched by middle-aged spinster Pilar (Teresa Madruga), whose elderly neighbour Aurora (Laura Soveral) is showing signs of dementia and is causing problems for her extremely patient but possibly overly strict carer, Santa (Isabel Muñoz Cardoso).

When Aurora is taken ill and rushed to hospital, she asks Pilar to track down a long lost lover of hers (Henrique Espírito Santo as Ventura), hoping to see him one more time before she dies. However, when Pilar finds Ventura, he begins to tell her a story about Aurora's past, when she was a young married woman (now played by Ana Moreira), living at the foot of Mount Tabu.

Madruga and Soveral are excellent and the relationship between Pilar and Aurora is both convincing and heart-breaking, as it's clear that Aurora depends on Pilar as if she was family because her own relations have more or less deserted her. There's also terrific support from Isabel Muñoz Cardoso in the modern day section, while Ana Moreira and Carlotto Cotta (as Young Ventura) are terrific in the lengthy flashback sequence that forms the film's second half.

The superbly written script is rich and involving, to the point where it feels as if you're reading a thoroughly absorbing novel that you just can't put down. Similarly, Gomes skilfully uses the script to address ideas of memory and storytelling, coupled with an exploration of the emotive power of early cinema itself (the title comes from FW Murnau's silent adaptation of one of Herman Melville's books). On top of that, the somewhat melodramatic third section is achingly romantic, which forms an intriguing contrast to the depressing reality of the contemporary segment.

The most original element of the film is its extraordinary style, with the action of the third act playing out like a traditional silent movie, only the audience can hear all the sounds except the actors speaking (the segment is narrated by Ventura as an old man). On top of that, the film has a superb soundtrack, which is brilliantly illustrated in two cleverly mirrored scenes involving characters crying while a Spanish version of Be My Baby plays on the soundtrack.

It's also beautifully shot in gorgeous black and white throughout, courtesy of superlative work from cinematographer Rui Poças.

Tabu is a brilliantly made, powerfully emotional drama that demands to be seen. A masterpiece. Great crocodile action, too.