Cutie and the Boxer 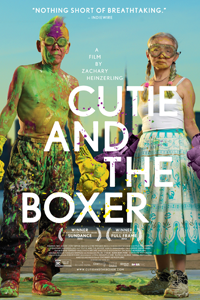 When Ushio Shinohara -- now 80 -- was a young man, he probably never dreamed that he'd be scuffling to sell his art, fretting over his inability to pay rent on his tiny Brooklyn loft or stuffing a suitcase with cardboard sculptures he hoped to sell in Japan.

When Shinohara moved from Japan to the U.S. in 1969, he was a young man of intense promise, an artist whose avant-garde approach garnered attention if not financial success. Infatuated with art and with himself, Shinohara kept working, but he also became an alcoholic party-animal who spent far too much time carousing with friends.

Shinohara and his wife Noriko now live in a cramped loft with a leaky roof and very little breathing room. She's also an artist, and at 59, she's just beginning to come into her own with a series of semi-autobiographical drawings built around two characters, Cutie and the aptly named Bullie.

Bullie is an obvious stand-in for Shinohara. If you want to understand Shinohara's attitude toward his wife, consider one of the statements he makes in Cutie and the Boxer, a beautifully crafted documentary about the life of a couple who have stayed together through lives marked by impoverishment, misery and struggle.

"The average one has to support the genius,'' says Shinohara, leaving no doubt about which one he believes himself to be.

Director Zachary Heinzerling, who served as his own director of photography, has made skillful use of scenes in which husband and wife interact. He also uses home movies from the past and a charming but tough-minded bit of animation made from Noriko's drawings about her life with a husband who's 21 year's her senior.

Noriko met her future husband when she arrived in New York at the tender age of 19, an aspiring artist who was wowed by Ushio's dynamism.

Shinohara's work includes what he calls "action paintings,'' paintings made by dipping foam-wrapped boxing gloves into buckets of paint and punching large canvases. Not surprisingly, these paintings acquire a blunt, provocative urgency.

Shinohara's cardboard sculptures -- many of motorcycles -- display equal amounts of wit and invention. He's not a deluded no-talent, and his lack of success doesn't seem to have diminished his opinion of himself.

If you're looking for a Japanese George and Martha, a couple who constantly slam each other verbally, you'll be disappointed. Cutie and the Boxer is not a wannabe Who's Afraid of Virginia Woolf?. Noriko tends to be honest, but matter-of-fact about her dissatisfactions, and although his ego, like his boxing paintings, still packs a wallop, Shinohara seems to know when it's advisable to back off.

Heinzerling approaches the competitiveness that inevitably results from two artists living together (they even share gallery space in one show) indirectly, capturing it Noriko's looks or Shinohara's off-hand comments.

Shinohara isn't the first charismatic artist to attract a younger woman, but what's unique about Cutie and the Boxer is the mystery at its core, the complex tie that has kept these two together for more than 40 years.

Noriko proves the more disarming of the two. Her pig-tails give her a pretty, girlish look, but when you see her art (much of it captioned), you begin to understand that she's taking quiet revenge on a husband who has dominated her a life.

The couple's son Alex also paints, but seems to have acquired his father's penchant for alcohol abuse. Noriko understands that the circumstances of her life have not been ideal for parenthood.

Heinszerling punctuates segments about the artists with beautifully rendered views of New York exteriors that provide small breaks from the Shinoharas' insularity.

Both Noriko and Ushio are devoted to art; he frets about what will and won't sell and both seem to understand that that they are bound to each other, just as they are bound to the creative processes that have ruled their lives.

Did Ushio squander his abilities by having far too much fun during the 1970s? Did Noriko indulge him more than she should have? Probably, but Heinzerling's film is less about nagging regret than about the inexplicable bond that keeps these two very distinctive people together.

At one point, Noriko says that they're like two plants in one pot. Sometimes, one gets more nourishment than the other. But, she says, when they both thrive together, the feeling cannot be surpassed.

This joint thriving may not be the norm for Ushio and Noriko, but then nothing seems entirely normal about this rare, intimate and genuinely involving film.

Cutie and the Boxer