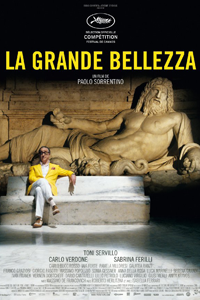 James Joyce knew he was writing for academics, so he packed Ulysses with references and styles that would keep astute observers looking closely for decades. After watching The Great Beauty, I'm inclined to think director Paolo Sorrentino is trying to do the same thing in film.

Take the first amazing fifteen minutes or so: fluid cameras follow just about everything happening in Rome -- many nonbeautiful faces and bodies walk the squares, tourists sit on park benches, locals wash in the fountains, a choir solemnizes a church, a tour guide tries to control an Asian tour group. Back to the choir, a soloist is picked out, then we cut to a screaming partier at a night club, where techno competes with mariachi. Some dance together, some dance on display, and it all culminates, minutes later, with an amazing line dance.

It's hard to trace a straight line through the film, but the lead character is Jep, played by Toni Servillo (who collaborated with director Paolo Sorrentino on Il Divo). Jep wrote one great novel when he was young: The Human Apparatus. Jep never wrote another novel. He pays the bills as a freelance writer. His friend and editor is Dadina (Giovanna Vignola), a woman he's proud to call "a dwarf." Jep lives in an apartment with a balcony that overlooks the Colosseum. He spends most of his (screen) time giving and attending parties with old friends and classy tastemakers of Roman society.

Alfredo's (Luciano Virgilio) late wife had been one of Jep's old flames, and he comes to tell Jep that her one true love in her life, was Jep, not him. Romano (Carlo Verdone), a friend in his 40s, is trying to make it as an actor or writer -- maybe he'll perform Shakespeare. Jep's advice is to write his own words, and not to assume that Shakespeare or anyone else is more of an expert at life and art than anyone else. Another friend owns a strip club and his forty-year-old daughter Ramona (Sabrina Ferilli) is one of his best dancers. She dates Jep a few times, and it's more about conversation than sex.

The vignettes seem to build toward a grand dinner party (which Jep will write about for the magazine) where a Mother Theresa-like figure (Giusi Merli) would attend as the guest of honor, the day before performing an act of pilgrimage, climbing a tall set of of stone steps on her frail knees. When she shows up she is so desiccated and dead-looking that her handler has to do all her speaking for her, and Jep can't get a decent interview. Also in attendance is a princess-for-hire. She's real royalty but she sits at home watching TV most nights. When she dresses to go to a party, it's strictly on the clock and for pay.

The Great Beauty, as you can guess, becomes a little more befuddling and less exciting as it continues. It has so many characters and situations to keep track of that it's hard to find the common ground.

Is there a point, or even a theme to all of this madness? It's hard to see one, other than "life is crazy and chaotic." Maybe it's Rome that is is crazy and chaotic -- at least if you travel in its top circles. In that sense, The Great Beauty looks a lot like Fellini's great paean to Rome and life, La Dolce Vita.

The first viewing is frenetic and exciting, but surely a second viewing -- especially with an academic, or heck, even just a Roman citizen -- would provide lots of insight into what you might have missed the first time through.