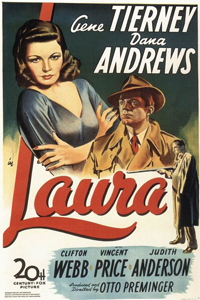 Laura is one of the quintessential examples of film noir that has endured as a classic for over 70 years. While it started out as a B-picture, its polish came about as the result of a series of happy accidents, second choices and great talent that helped elevate its status on all levels. It ultimately achieved five Oscar® nominations (winning one). It's a somewhat unconventional noir with a collection of odd elements that all come together and work. As Roger Ebert said in a 2002 article, "Film noir is known for its convoluted plots and arbitrary twists, but even in a genre that gave us The Maltese Falcon [1941], this takes some kind of prize. Laura has a detective who never goes to the station; a suspect who is invited to tag along as other suspects are interrogated; a heroine who is dead for most of the film; a man insanely jealous of a woman even though he never for a moment seems heterosexual; a romantic lead who is a dull-witted Kentucky bumpkin moving in Manhattan penthouse society, and a murder weapon that is returned to its hiding place by the cop, who will 'come by for it in the morning.' The only nude scene involves the jealous man and the cop." Unconventional though it may be, it is all the better for its collection of improbable quirks.

Laura's famous musical score, rooted in its luscious haunting main theme composed by David Raksin, instantly became one of the most recognizable and beloved pieces of movie music in history. The music's popularity helped Raksin's career immeasurably, which took off as he entered the top echelon of film composers in Hollywood.

Even though the lyrics were added to David Raksin's beautiful music after the film's release, the song "Laura" quickly became a standard and one of the most popular songs ever recorded.

The delicious role of acid-tongued Waldo Lydecker was actor Clifton Webb's first big starring role in a Hollywood film, and his first screen role since the early days of cinema. Webb, who had been working successfully as a stage actor for many years, knew that his performance could help make or break his career in movies, and at age 56 he didn't have much time to waste. The success of the film, for him, resulted in an Academy Award nomination and a whole new prominent career in Hollywood films.

The success of Laura helped launch Otto Preminger's career as one of the best directors in Hollywood. The imposing Preminger had been working as mostly a producer since his arrival in Hollywood, and thanks to a damaging feud with Twentieth Century-Fox production chief Darryl Zanuck, he was sidelined for a time, keeping him from doing what he most wanted to do: direct. However, Preminger was given another shot behind the camera on Laura, and it became one of the most famous directorial triumphs of his career.

Laura boasts one of the biggest plot twists in cinema history that surprised - and continues to surprise - even the savviest of moviegoers. In true whodunit fashion, the plot's twists and turns and remarkable collection of vivid characters truly keep viewers guessing until the very end - even today.

The role of Laura's caddish buttery fiancé Shelby Carpenter was one of Vincent Price's best roles and reportedly a personal favorite for the actor. For those who know Price's work primarily for the horror films that became indelibly associated with him, Laura will impress viewers with Price's broad talent and range.

Laura was the film that was forever associated with gorgeous actress Gene Tierney. The film's success helped establish her as a major star and helped elevate her to the Hollywood A-list of leading ladies.