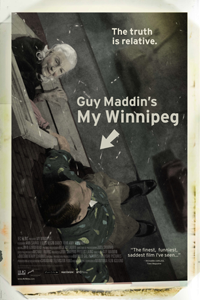 Preceded by Guy Maddin's short film My Dad is 100 Years Old (2003, 35mm, 17 min)
As a maker of art films, Guy Maddin coined the term "docutasia" to describe his pastiche of archival images and distressed new footage. In MY WINNIPEG, he uses his favorite techniques to evoke the presences of the people and places that have influenced him, and to reveal some of his true feelings about his origins among these ghostly presences. After seeing “My Winnipeg,” Guy Maddin’s odd and touching tribute to his hometown, I was tempted to do some further research. A few minutes at Wikipedia or the official Web site of the province of Manitoba would surely clarify some of the curious claims Mr. Maddin, the only famous Winnipeg native I can name off the top of my head, makes about the city.

For instance: Is there really a municipal law against throwing away old signs? Does Winnipeg indeed have two separate taxi companies, one working the major streets, the other confined to the back alleys? Were some of the streets named after well-known prostitutes and brothel owners? Did horses, fleeing a fire in the 1920s, actually freeze to death in the river, their icebound heads providing props for skaters? Is it true that the city fathers used to sponsor an annual treasure hunt in which first prize was a one-way ticket out of town?

To be honest, I’d rather not know. Fact-checking “My Winnipeg” would be absurd, since the film, which combines archival documentary images with freshly shot, antique-looking passages, is more concerned with lyrical truth than with literal accuracy. And even though I suspect that some of its more outlandish assertions are at least partly grounded in fact, Mr. Maddin is engaged less in historical inquiry than in hallucinatory autobiography, ruminating on the deep and accidental relationship between a specific place and an individual life.

As “My Winnipeg” conjures it, the bond between city and filmmaker is ambivalent and reciprocal. Much as he may dream of taking that one-way rail journey to somewhere else, Mr. Maddin can no more spurn Winnipeg than it can disown him. In a thoughtful, occasionally excitable voice-over he dutifully tries to explain the place — its riverine topography and wintry climate, its civic traditions and architectural landmarks. But his real point — and, for admirers of this brilliant and idiosyncratic artist, the true source of the movie’s interest — is that Winnipeg explains him.

Not that either the man or the city is entirely knowable. The psychosexual mysteries of his own personality and family background have long preoccupied Mr. Maddin, most recently in the feverish “Brand Upon the Brain.” So too have the kinks and twists of history, both factual and fantastic (though usually Canadian). His enthusiasm for obsolescent cinematic techniques — silent-film emoting, iris lenses, shadowy monochrome, collagist editing — is at once antiquarian and futuristic, a way of exhuming buried possibilities for novelty and speculation. And so, unleashing his eye and imagination on the prosaic, sad reality of an ordinary North American town, he proposes an alternative account that is mysterious, heroic and tragic. His Winnipeg is a place where ghosts commingle with regular citizens and may in fact be the true native spirits.

Among those specters are Mr. Maddin’s mother, played in marvelously melodramatic re-enactments by Ann Savage. Revisiting his childhood home — rooms permeated by the odors of the beauty parlor downstairs, which infused young Guy with mysterious feminine influences — he stages a funny and unnerving domestic tableau, in which the buried themes of sex, need and emotional peril bubble close to the surface.

Is Winnipeg Mr. Maddin’s name for his own unconscious? Or do he and the city, the map of which reminds him of a woman’s genitals, share a tendency to find perversity buried in the banal and the everyday? It’s hard to say for sure, but whatever its connection to the actual, transitory city, Mr. Maddin’s Winnipeg — “My Winnipeg” — is as real as any work of art can be. — A. O. Scott, The New York Times