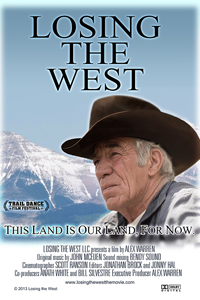 The presentation will be followed by a discussion between Patty Limerick and the film’s Director and Producer, Alex Warren.

“Losing the West” is a documentary about the protection of open space and agricultural lands, illustrated by the story of Colorado cowboy Howard Linscott, a gruff, chain-smoking 70-year-old who’s been ranching all his life. As we follow him across the magnificent Colorado Rockies, the film explores whether small ranching and farming and this fiercely independent lifestyle can survive as they collide with inevitable population growth in the West and its dwindling natural resources.

The interviews include Dr. Patricia Nelson Limerick of the Center of the American West, U.S. Senator Michael Bennet (D-Colorado), Colorado State Senator Ellen Roberts (R), Andy Lipkis, founder and president of TreePeople (one of California’s preeminent environmental organizations), representatives of the Colorado Coalition of Land Trusts and the Colorado Cattlemen’s Agricultural Land Trust, as well as the family, friends and co-workers of Howard Linscott.

With farm and ranch land dwindling due to population growth and development, many have made the hard choice to sell their land. As the U.S. population expands, who will raise our crops and livestock? How can we preserve the resources we need to sustain life? How will we feed twice as many people? What will happen if we lose our fertile lands and open spaces? Can we stop or slow this trend before it’s too late?