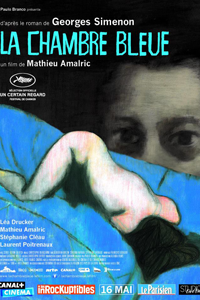 Bracing, brisk and technically dazzling, Mathieu Amalric's The Blue Room is the rare movie you might wish was a bit longer, even as you realize that the pacing -- along with the virtuositic editing and the breakneck shuffling between time frames -- is the greater part of the fun.

While based on a 1964 novel by the legendarily prolific Georges Simenon -- the Belgian author of (mainly) detective fiction who published nearly 200 novels and whose material has been adapted into more than 170 films (including Bela Tarr's The Man From London from 2007 and Jean Renoir's Night at the Crossroads from 1932) -- The Blue Room is anything but your standard pulp thriller. The narrative, something about an adulterous affair and the possibility of murder, has been shattered and re-assembled in an artful and precise mosaic that engages and alarms.

Amalric, who first became known to American audiences as the locked-in protagonist of Julian Schnabel's The Diving Bell and the Butterfly (2007), seems determined to be as audacious behind the camera as he is in front of it. He skitters through this story as prosperous farm machinery representative Julien who is carrying on a torrid affair with the wife of a small-town pharmacist (Stephanie Cleau, who is Amalric's real-life girlfriend). The "blue room" of the title actually refers to two spaces -- the hotel room where the lovers meet on Thursday afternoons (and where first blood is drawn) and the chambers of the magistrate (Laurent Poitrenaux) who questions them about the nature of their relationship as he investigates some terrible crime.

These scenes are interspersed by pop-ins to Julien's fabulous country home, where he dwells with his suspicious wife (Lea Drucker) and darling young daughter (Mona Jaffart), insulated from the raging mob outside. (The parallels between this film and David Fincher's 150-minute Gone Girl are unmissable, if completely coincidental.) There's a telling, fraught passage at a beach, where Julien's mask slips a bit. All the performances are very fine, but Amalric and Drucker are particularly good at telegraphing the erosion of marital trust.

As refreshing and zippy as The Blue Room is in this age of lumbering, self-important epics, it should be noted that it's a movie that exists solely to demonstrate its own style. While there's nothing exactly wrong with this, it's not the sort of movie that's likely to stay with you -- its lush, evocative soundtrack (by Gregoire Hetzel channeling Bernard Herrmann's work for Hitchcock), boxy 4:3 camera ratio and flashy structure distract us from the pedestrian nature of the story and its anti-climatic ending.

Still, scene by scene, The Blue Room is a marvelous construction; a house of broken mirrors.