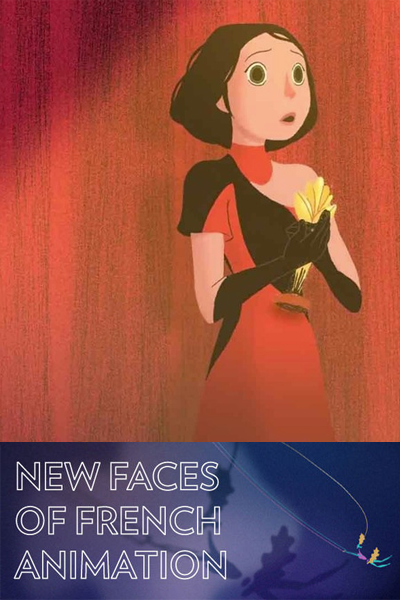 Please note: some shorts may include language, violence, nudity, and adult themes

New Faces of French Animation, a program launched by the Cultural Services of the French Embassy in Canada and the US in 2015, offers non-commercial theaters a selection of short animated films that were presented at the most recent Annecy International Animation Film Festival and is returning in 2016 for its second year.

With a program developed by Marcel Jean, artistic director of the Annecy International Animated Film Festival, New Faces of French Animation 2016 is offering the following eight films from the 2015 Festival.

Alison is giving birth to a creature that runs away when faced with the oppressing stares of huge statues surrounding it. Alison then runs after the creature and is ultimately confronted with the eyes of the crowd. This short is one of the intros created by a Gobelins - L'École de L'Image animation student. It pays tribute to Alison de Vere, the first woman animated filmmaker in Britain.

YUL AND THE SNAKE

Yùl, 13, goes with his big brother Dino to make a deal with Mike, a thug escorted by his Argentine Mastiff. When things go wrong, a mysterious snake appears.

TIGERS TIED UP IN ONE ROPE

An extremely lazy boy is scolded by his mother, who can no longer bear to watch him do nothing but eat and sleep all day long. He finally decides to get a job and reveals unanticipated amounts of imagination, creativity and perseverance.

It's Sunday. While eating lunch, Jean observes his family members. They ask him questions but don't listen to his answers; they give him advice that they don't follow; they kindly stroke him and slap him. It's all normal – it's Sunday lunch.

A SLICE OF THE COUNTRY

The sun is shining in the countryside. A family of animals finds a nice spot for a picnic. Nearby, another animal is peacefully grazing. But the tranquil atmosphere of this luncheon on the grass rapidly degenerates.

From the infinitely small to the infinitely big, everything in the universe is closely linked and made up of a combination of movements in perpetual metamorphosis.

The day after Hugo’s mother comes home, he wakes up to find black feathers scattered all over the house.

Three characters share a secret and intimate experience that makes an indelible mark on their lives.