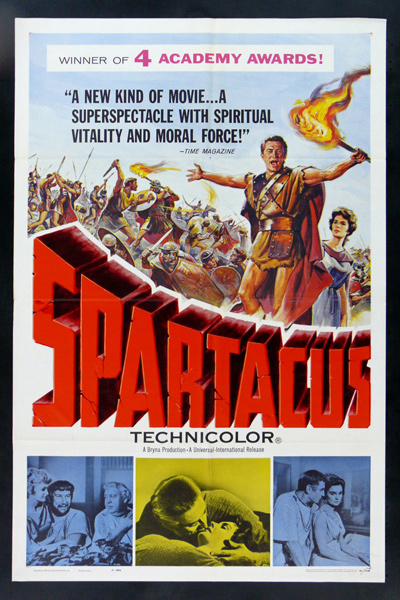 Spartacus, the film, was based on a novel by Howard Fast who started writing it when he was serving a prison term for Contempt of Congress; a member of the Communist Party, he'd refused to name names before the House UnAmerican Activities Committee. Kirk Douglas bought the book for his production company, and daringly hired blacklisted Dalton Trumbo, who had also been imprisoned for his beliefs, as screenwriter. Anthony Mann started directing, but he and Douglas fell out and Mann was replaced by Stanley Kubrick, the young genius who had worked with Douglas on PATHS OF GLORY. A brilliant cast was assembled, including Charles Laughton and Laurence Olivier as rivals in the Roman Senate, Peter Ustinov as a slave trader, and Jean Simmons as a slave from Britain.

SPARTACUS is far from flawless, but it's the best of the epics and, thanks to the intelligence of Trumbo's screenplay and the stellar cast (and I mustn't forget Tony Curtis in a sexually ambiguous role - one of his scenes with Olivier was cut before the film opened, but was restored years later). Olivier and Laughton are particularly fine as the rival politicians, both of them wonderfully decadent. There have been other versions of the Spartacus story, including a silent epic and a more recent TV series, but Kubrick's film can't be beaten. I was overwhelmed by it in 1961, and I still love it today.

— David Stratton, At the Movies