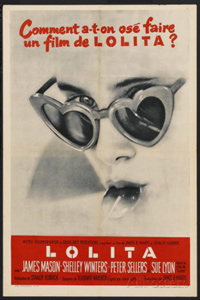 Though Vladimir Nabokov adapted his own novel for the Lolita screenplay, he denounced it later. He was being too harsh. Though the movie lacks Humbert Humbert's exquisite inner voice, James Mason portrays him with enough longing and suffering to make up for it.

But the real stunner is Sue Lyon as Lolita (a little older here than in the book), a callous, sexy temptress, who slowly turns into the world-weary victim. Peter Sellers steals the film as Claire Quilty, a much bigger role here than in the book, performing different characters and different voices as a precursor to his Dr. Strangelove tour-de-force two years later.

Kubrick keeps the elegant black-and-white film big and luxurious and barren and sustains the cold humor over the entire 2 and a half hour running time. Vladimir Nabokov received an Oscar nomination (!) for his adapted screenplay.