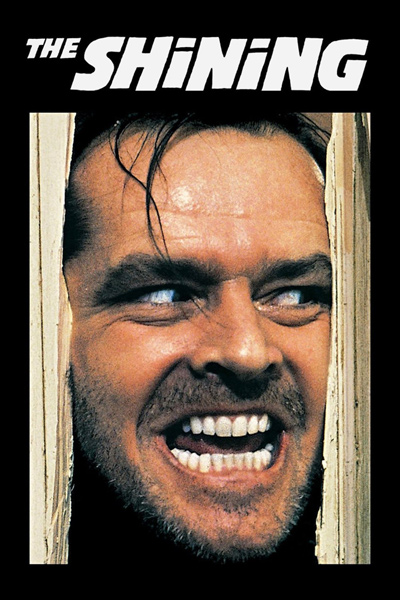 Stanley Kubrick's cold and frightening "The Shining" challenges us to decide: Who is the reliable observer? Whose idea of events can we trust? In the opening scene at a job interview, the characters seem reliable enough, although the dialogue has a formality that echoes the small talk on the space station in "2001." We meet Jack Torrance (Jack Nicholson), a man who plans to live for the winter in solitude and isolation with his wife and son. He will be the caretaker of the snowbound Overlook Hotel. His employer warns that a former caretaker murdered his wife and two daughters, and committed suicide, but Jack reassures him: "You can rest assured, Mr. Ullman, that's not gonna happen with me. And as far as my wife is concerned, I'm sure she'll be absolutely fascinated when I tell her about it. She's a confirmed ghost story and horror film addict."

Do people talk this way about real tragedies? Will his wife be absolutely fascinated? Does he ever tell her about it? Jack, wife Wendy (Shelley Duvall) and son Danny (Danny Lloyd) move into the vast hotel just as workers are shutting it down for the winter; the chef, Dick Hallorann (Scatman Crothers) gives them a tour, with emphasis on the food storage locker ("You folks can eat up here a whole year and never have the same menu twice"). Then they're alone, and a routine begins: Jack sits at a typewriter in the great hall, pounding relentlessly at his typewriter, while Wendy and Danny put together a version of everyday life that includes breakfast cereal, toys and a lot of TV. There is no sense that the three function together as a loving family.

Danny: Is he reliable? He has an imaginary friend named Tony, who speaks in a lower register of Danny's voice. In a brief conversation before the family is left alone, Hallorann warns Danny to stay clear of Room 237, where the violence took place, and he tells Danny they share the "shining," the psychic gift of reading minds and seeing the past and future. Danny tells Dick that Tony doesn't want him to discuss such things. Who is Tony? "A little boy who lives in my mouth."

Tony seems to be Danny's device for channeling psychic input, including a shocking vision of blood spilling from around the closed doors of the hotel elevators. Danny also sees two little girls dressed in matching outfits; although we know there was a two-year age difference in the murdered children, both girls look curiously old. If Danny is a reliable witness, he is witness to specialized visions of his own that may not correspond to what is actually happening in the hotel.

That leaves Wendy, who for most of the movie has that matter-of-fact banality that Shelley Duvall also conveyed in Altman's "3 Women." She is a companion and playmate for Danny, and tries to cheer Jack until he tells her, suddenly and obscenely, to stop interrupting his work. Much later, she discovers the reality of that work, in one of the movie's shocking revelations. She is reliable at that moment, I believe, and again toward the end when she bolts Jack into the food locker after he turns violent.

But there is a deleted scene from "The Shining" (1980) that casts Wendy's reliability in a curious light. Near the end of the film, on a frigid night, Jack chases Danny into the labyrinth on the hotel grounds. His son escapes, and Jack, already wounded by a baseball bat, staggers, falls and is seen the next day, dead, his face frozen into a ghastly grin. He is looking up at us from under lowered brows, in an angle Kubrick uses again and again in his work. Here is the deletion, reported by the critic Tim Dirks: "A two-minute explanatory epilogue was cut shortly after the film's premiere. It was a hospital scene with Wendy talking to the hotel manager; she is told that searchers were unable to locate her husband's body."

If Jack did indeed freeze to death in the labyrinth, of course his body was found -- and sooner rather than later, since Dick Hallorann alerted the forest rangers to serious trouble at the hotel. If Jack's body was not found, what happened to it? Was it never there? Was it absorbed into the past, and does that explain Jack's presence in that final photograph of a group of hotel partygoers in 1921? Did Jack's violent pursuit of his wife and child exist entirely in Wendy's imagination, or Danny's, or theirs?

The one observer who seems trustworthy at all times is Dick Hallorann, but his usefulness ends soon after his midwinter return to the hotel. That leaves us with a closed-room mystery: In a snowbound hotel, three people descend into versions of madness or psychic terror, and we cannot depend on any of them for an objective view of what happens. It is this elusive open-endedness that makes Kubrick's film so strangely disturbing.

Yes, it is possible to understand some of the scenes of hallucination. When Jack thinks he is seeing other people, there is always a mirror present; he may be talking with himself. When Danny sees the little girls and the rivers of blood, he may be channeling the past tragedy. When Wendy thinks her husband has gone mad, she may be correct, even though her perception of what happens may be skewed by psychic input from her son, who was deeply scarred by his father's brutality a few years earlier. But what if there is no body at the end? Kubrick was wise to remove that epilogue. It pulled one rug too many out from under the story. At some level, it is necessary for us to believe the three members of the Torrance family are actually residents in the hotel during that winter, whatever happens or whatever they think happens.

Those who have read Stephen King's original novel report that Kubrick dumped many plot elements and adapted the rest to his uses. Kubrick is telling a story with ghosts (the two girls, the former caretaker and a bartender), but it isn't a "ghost story," because the ghosts may not be present in any sense at all except as visions experienced by Jack or Danny.

The movie is not about ghosts but about madness and the energies it sets loose in an isolated situation primed to magnify them. Jack is an alcoholic and child abuser who has reportedly not had a drink for five months but is anything but a "recovering alcoholic." When he imagines he drinks with the imaginary bartender, he is as drunk as if he were really drinking, and the imaginary booze triggers all his alcoholic demons, including an erotic vision that turns into a nightmare. We believe Hallorann when he senses Danny has psychic powers, but it's clear Danny is not their master; as he picks up his father's madness and the story of the murdered girls, he conflates it into his fears of another attack by Jack. Wendy, who is terrified by her enraged husband, perhaps also receives versions of this psychic output. They all lose reality together. Yes, there are events we believe: Jack's manuscript, Jack locked in the food storage room, Jack escaping, and the famous "Here's Johnny!" as he hatchets his way through the door. But there is no way, within the film, to be sure with any confidence exactly what happens, or precisely how, or really why.

Kubrick delivers this uncertainty in a film where the actors themselves vibrate with unease. There is one take involving Scatman Crothers that Kubrick famously repeated 160 times. Was that "perfectionism," or was it a mind game designed to convince the actors they were trapped in the hotel with another madman, their director? Did Kubrick sense that their dismay would be absorbed into their performances?

"How was it, working with Kubrick?" I asked Duvall 10 years after the experience.

"Almost unbearable," she said. "Going through day after day of excruciating work, Jack Nicholson's character had to be crazy and angry all the time. And my character had to cry 12 hours a day, all day long, the last nine months straight, five or six days a week. I was there a year and a month. After all that work, hardly anyone even criticized my performance in it, even to mention it, it seemed like. The reviews were all about Kubrick, like I wasn't there."