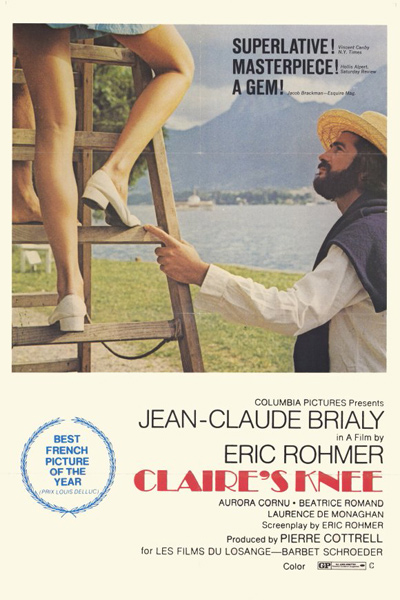 Eric Rohmer's "Claire's Knee"comes very close to being a perfect movie of its kind, something on the order of an affectionate comedy of the intellect that has no easily identifiable cinema antecedents except in other films by Mr. Rohmer, most notably "My Night at Maud's."

It is the product of a literary sensibility, and it grows out of a literary tradition, but it is, first and foremost, a superlative motion picture. Like "Intolerance," "My Darling Clementine," "Rear Window" and "Le Gai Savoir"—movies I mention only because it resembles them not in the least—"Claire's Knee" could exist in no other form.

The film is the fifth in Rohmer's projected cycle of "Six Moral Tales," each of which is designed as a variation on the theme of the man who, in love with one woman, feels drawn to another, whom he finally rejects in order to pursue the first, whom he may or may not win. Carlos Clarens, writing in Sight and Sound, has called this official schema "a snare for professional film decoders," and I agree.

The joys in Rohmer's Moral Tales exist not so much in the variations he works, nor in contrasting one film with another, but in responding to the various levels of experience contained within each film. "Claire's Knee" is more easily accessible than "Maud," and more complex, less of a conventional narrative and more of an emotional experience.

The setting is near Annecy in western France, not far from the Swiss border, a lovely, slightly out-of-fashion summer community that faces the overwhelming Alps across the Lake of Annecy. The time of the film is most exact: it opens on Monday, the 29th of June, and closes on Wednesday, the 29th of July. Among other things, the movie is all about the disciplines by which civilized man maintains his sanity, including the concept of time.

Jerome (Jean-Claude Brialy), a diplomat in his thirties, engaged to Lucinda whom he will join in Stockholm shortly, has come to Annecy to sell the villa where he spent his vacations as a boy. There by chance he meets an old friend, Aurora (Aurora Cornu), a beautiful, wise, amused novelist, with whom he's always been somewhat in love, and the two teen-age daughters, Laura (Beatrice Romand) and Claire (Laurence De Monaghan) of the family Aurora is staying with.

Both Aurora and Jerome are, as they say, "in transit"—their real lives are elsewhere. Out of curiosity, and to amuse Aurora, who says she needs inspiration for a story, Jerome allows himself to become drawn to 16-year-old Laura, who, according to Aurora, is in love with him. Suddenly, however, he finds himself full of desire for the somewhat older Claire, specifically for her right knee, that "magnet" of his desire that, in another woman, might be located in the nape of the neck, the waist or the hands.

If "Claire's Knee" can be said to have a story, it would relate, I suppose, to how Jerome succeeds, for one brief moment, in possessing Claire's knee. Through plot permutations I need not go into, Jerome's gesture of desire is accepted as one of consolation.

"Claire's Knee" unfolds like an elegant fairy tale in a series of enchanted and enchanting encounters, on the lake, in gardens heavy with blossoms, in interiors that look like Vermeers. Everything in this world has sharply defined edges, like the lake, which is not bordered by beach but by a manmade quay.

Jerome, Aurora and Laura live according to sharply defined rules of behavior. Although they may seem romantic in that their conversation is mostly of love and friendship, this is, of course, a human activity of the most refined sort. When they explore their own emotions, test their feelings and exercise aspects of their will, it is a sport for esthetes. For them, in spite of all their talk about being bored with love and suffocated by beauty, each polite meeting becomes as fraught with suspense and danger as a confrontation of gladiators.

Beneath this surface level, "Claire's Knee" is also about self-deception, about cruelty, about a certain kind of arrogance that goes with wisdom, and very much about sex. It is no accident that the beautiful, lean, comparatively stupid Claire, for whom Jerome conceives his "pure desire," is the only person in the movie enjoying, at the moment, a completely satisfactory, uninhibited sex life.

The film is as physically lovely as any I've seen in years, and the performances are of such variety and wit that they should remove forever the notion that Rohmer, with his literary sensibility, is not essentially a filmmaker. Everyone is fine, but I have special feeling for Miss Romand, who grows up in such mysterious and wonderful ways in front of the camera, and for Miss Cornu, a novelist and poet in real life, who comes close to being a total woman.

"Claire's Knee" is a difficult film to do justice to without over-selling it. It is so funny and so moving, so immaculately realized, that almost any ordinary attempt to describe it must, I think, in some way diminish it.