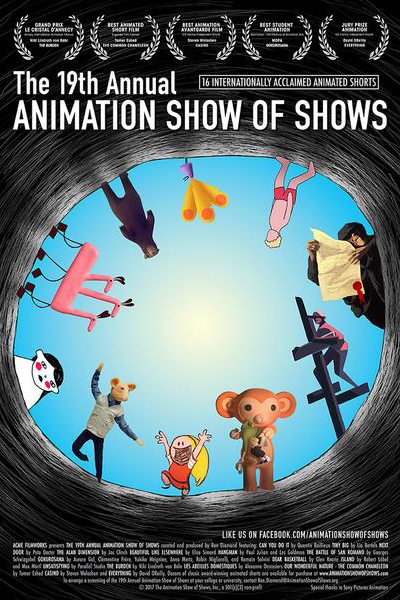 The playlist for tonight's animation show:

An exceptional program that starts off strong and only gets better as it goes, the 19th Annual Animation Show of Shows overflows with charm while containing more provocative observations about the nature of existence than most prestige feature films do. Animators both obscure and famous show their wares here, in a program paced beautifully by Ron Diamond, who decided in 2015 to open his annual best-of DVD collections up to theatrical booking. Anyone who attends this third event will hope it stays public for years to come.

As usual in this and most other packages of animation, full-on abstract experimentation is hard to find. Viewers seeking that should look up the Center for Visual Music, which champions sound-meets-image abstraction (and sells DVDs) — but here, they'll enjoy Steven Woloshen's Casino, in which images are drawn directly onto film and set to some jaunty bebop by Oscar Peterson.

Elsewhere, experimentalism is put in the service of narrative, however loose and ambiguous the storytelling may be. In Elise Simard's Beautiful Like Elsewhere, for instance, expressionistic images accrue to depict dreamscapes or lonesome reveries. In Quentin Baillieux's figurative but ambiguous music video Can You Do It, a horse chase down an urban freeway speaks obliquely to race relations.

Some allegories are easily deciphered, as in Next Door, an early work by Inside Out director Pete Docter. Another entry drawn from the past, 1964's The Hangman, is a "first they came for the —'s" parable set in a de Chirico-like small town whose craven citizens blindfold themselves willingly to others' persecution, wrapped up like characters in a Magritte painting.

Other shorts offer pure pleasure. Max Mortl and Robert Lobel's Island looks like a picture-book you'd give to a very hip child; the faux-educational film Our Wonderful Nature: The Common Chameleon, would have that kid (and his adult guardians) guffawing in the aisles. Gokurosama, whose gentle physical comedy recalls Tati, takes place in a Japanese shopping mall where the physical world presents one obstacle after another — as it does in the crisply illustrated, tartly comic Unsatisfying.

Other small gems (like Lia Bertels' Tiny Big) are scattered around one or two films that might not deserve to be in this company. (Though technically polished and probably moving to Kobe Bryant's fans, Dear Basketball plays like self-hagiography in the guise of the star's fond farewell to the sport.)

The cosmic showstoppers fall toward the end. David O'Reilly's Everything looks like a computer game because it is: The film teases the experience of a critically acclaimed game of the same name, in which microbes and mammals and galaxies all share the same importance. As a movie, it functions a bit like a 21st-century version of Charles & Ray Eames' iconic Powers of Ten; adding audio from a 1973 Alan Watts lecture brings a heady philosophical quality to the action.

While Watts muses about "the illusion that it's utterly important that we survive," the highlight of Show of Shows turns existential malaise into something weirdly delightful (and 100% Scandinavian). In My Burden, Niki Lindroth von Bahr boils the aching loneliness of an entire planet down into the mundane complaints surrounding a single highway intersection. Here, cute stop-motion animals stand in for homely humans: Sardines wonder why they've chosen loneliness over companionship; monkeys cope with telemarketing careers; hairless mole rats mop the floors of a fast-food restaurants. And all do so while singing the oddly entrancing music of Hans Appelqvist. Whether you see it as a deadpan attempt to reconcile with angst or a laugh-out-loud suicide note, it is — like several films here — a reminder of the practically infinite possibilities represented by short-form animation. — John DeFore, Hollywood Reporter