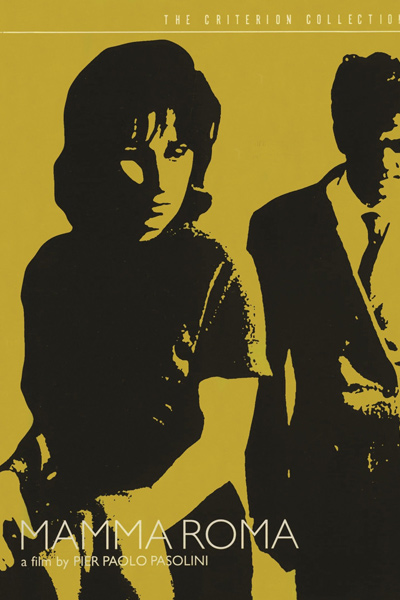 Hell hath no fury like Mamma Roma, the virago played so stormily by Anna Magnani in Pier Paolo Pasolini's astonishing 1962 film. Along with its obvious echoes of Italian postwar neo-realism, including explicit references to works by Roberto Rossellini and Vittorio De Sica, the previously obscure "Mamma Roma" also seethes with the sensuality and dark iconoclasm that would mark Pasolini's subsequent career.

Indeed, beyond this film's stark visual beauty and its madly inappropriate Biblical references, there lies a murky, overheated sexual melodrama suggestive of Tennessee Williams, himself a great admirer of La Magnani's raw histrionic style. Here she plays a former prostitute who brings a feverish, unexamined intensity to the job of bringing up her sexually ripe adolescent son. The boy's destiny is thus shaped in fearsome ways by his mother's eroticism. Mamma Jocasta would have been more like it.

"Mamma Roma," which opens today at the Film Forum, is a fascinating rarity, a film not even presented at museum screenings in America until 1988. It was the second feature (after "Accatone") made by this protean and increasingly perverse film maker, poet, novelist and playwright, whose later, more feverish works included "The Decameron," "The Canterbury Tales" and "The Arabian Nights."

By the time of his murder in 1975, Pasolini's vision had reached the sordid excesses of "Salo," which has in recent months been the basis for an obscenity case against a Cincinnati video store that made the film available for rental. It was a long way to that film's scatological extremes from the relative restraint of "Mamma Roma."

Still under the influence of his neo-realist forbears, Pasolini conceived a central character resembling Ms. Magnani's Pina, the heroine of Rossellini's "Open City," who dies while pregnant at the end of that 1945 landmark but is essentially revived in 1962 as the mother of a teen-age son. Though her eruptive acting style is slightly tamed by Pasolini's meticulous, deliberate direction, Ms. Magnani has lost none of her witchy gusto in this role.

Mamma Roma is first seen delivering taunts at a country wedding, which Pasolini staged to resemble the Last Supper even though the bride is faintly grotesque and the groom is Carmine (Franco Citti), Mamma Roma's former pimp. With typical restraint, Mamma Roma makes this first appearance shepherding pigs in hats and mocking Italy's national anthem. The elegance of this film's beautiful black-and-white cinematography (by Tonino Delli Colli) is never matched by any corresponding delicacy to its drama.

"You laugh like a pair of bellows," one man at the wedding tells Mamma Roma, and it's true. She greets each development in this tempestuous story with a robust, mocking vitality that the film celebrates without question. And questions are certainly in order once Mamma Roma resumes contact with Ettore (Ettore Garofolo), the son she had to abandon and now chooses to guide toward respectability. Liberated from prostitution in fact if not in mannerisms, Mamma Roma now plans to sell produce in the marketplace and make a good life for her son.

Well. From their first moments in Rome together, with mother leading son in an ecstatic, prurient tango, "Mamma Roma" revels in the endless lurid nuances of its story. That they happen to contrast mightily with Pasolini's images of Mamma Roma and Ettore as Madonna and Christ is only one small part of this film's eccentricity. Shot either in velvety nighttime, where Mamma Roma is the queen of casual Roman decadence, or in sun-baked, midday landscapes that create an effortlessly torrid atmosphere, the story imprisons its characters in a world of temptation.

Ettore falls under the spell of a compliant young woman named Bruna, who can be had for the price of cheap jewelry and who also happily accommodates all the other young men Ettore has become friends with. The camera's meaningful appraisals of these sultry young men become part of the film's insinuating manner. Meanwhile, when the mother learns what her son has been up to, she exclaims, "That's why I made a boy!" and then persuades a prostitute to lure him away from Bruna. In this atmosphere, it's indeed hard for Pasolini to shape "Mamma Roma" as a story of righteousness and the hope for redemption. But he tries.

"Have you seen the Devil, or what?" someone asks Mamma Roma during the story. With her pitch-black hair, haggard eyes and bottomless well of emotion, Ms. Magnani suggests that she has seen things her audience can barely imagine, and that she struggles tirelessly against her own memories every day. In a couple of the film's remarkably stylized sequences, she strolls through the streets of Rome by night and recites the story of her life to whoever walks beside her, as if "Mamma Roma" were on the verge of becoming a work of musical theater. Pasolini's score for the film, incidentally, relies heavily on Vivaldi for the rich sense of forboding this story needs.

Beyond the excitingly overwrought Magnani, the film's cast consists mostly of voluptuous-looking nonprofessionals with the appropriately sinister air. (Mr. Citti, whose brother Sergio collaborated with Pasolini on the screenplay, spent time in jail while filming was under way.) Minor characters in the credits are variously listed as "thug," "pimp," "male prostitute" and so on. One familiar face is that of Lamberto Maggiorani, so stirringly memorable as the father in "The Bicycle Thief," who here plays a hospital patient robbed by Ettore as Mamma Roma's hopes for him prove futile. Only a film maker of Pasolini's dauntlessly operatic intensity could follow the boy's petty crime with imagery suggesting the Crucifixion. — Janet Maslin, The New York TImes