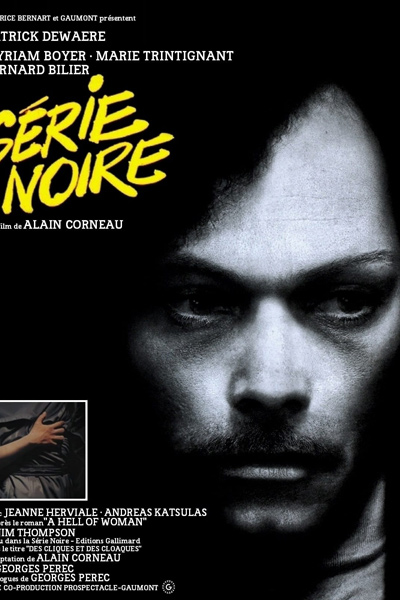 Whether we're meant to root for them or recoil in horror, the protagonists of Jim Thompson's novels are rarely able to enjoy their good fortune. The narrator of The Nothing Man looks like Don Draper, can drink everything in sight without losing his footing and is sly enough to charm his bosses even as he insults them — but, having lost his genitals in the war, can't deliver on the masculine charm others see. The Grifters' Roy Dillon is battled over by two sexy and streetwise dames, both willing to use their wiles to cozy up to him — but one of them's his mother.

In Serie Noire, the 1979 adaptation of Thompson's A Hell of a Woman, Alain Corneau and screenwriter Georges Perec display as strong a feel for the novelist's bleak worldview as can be found in the many films derived from his work. An enticingly nasty little crime film in which all pleasures go sour before they can be enjoyed, it is ripe for rediscovery in Rialto's fine restoration, and will be many Americans' first encounter with star Patrick Dewaere, whose funny, bracingly strange turn here was among his last.

Dewaere is door-to-door salesman Franck Poupart, a slightly mad man in a trench coat and a thin moustache. We meet him as he slags off work to loiter in a muddy field, shadow-boxing to a transistor radio instead of hawking overpriced sets of flatware.

He's on the lookout for a customer who owes money, and at one stop on his investigation, he finds much more. The punch-drunk debtor named Tikides (Andreas Katsulas) briefly did some carpentry for an old lady (Jeanne Herviale) in a neglected suburb. She thinks he cheated her, and is happy to point the debt-collector toward him. But first, perhaps he has something he'd like to trade for a few minutes with her niece?

The niece the woman hopes to pimp out is Mona — played by a then-16-year-old Marie Trintignant. (Appropriately, regardless of the book's title, when Franck flees the house he calls her a "hell of a girl.") Mona is passive and silent when Franck is sent, not really understanding what's up, to her room: She drops her dress and stands before him, waiting to do her job. But when he does the decent thing and tries to leave, even to get her help, she clings to him, seeming to decide on the spot that she wants him whether he's giving her aunt free houserobes or not.

Franck returns home to a wife, Jeanne (Myriam Boyer), who turns every house they inhabit into "a dump." They argue and she announces she's leaving him. "I won't be back. You can kiss me if you like" — an unusually generous gesture, considering she's about to sneak in and destroy all his clothes once Franck leaves.

Franck has been skimming from his boss Staplin (Bernard Blier), who has him thrown in jail to teach him a lesson. But his debt is soon paid by a woman Staplin assumes is Mrs. Poupart, and when Franck emerges from the office, Mona is waiting on the sidewalk. She wants him to help her steal the horde of cash her aunt has hidden; if that's not enough to scare any film noir fan away, Mona admits her aunt keeps a gun in the house.

Dewaere's unpredictable performance has made the film compelling from the opening scene, but Franck is, after all, a human man: He takes the bait, and begins plotting to rob the old lady. As we watch him try to maneuver the big lug Tikides into the scheme, surely intending to frame him, Corneau and Perec let us wonder how many layers of betrayal we're witnessing. Is Mona a solitary femme fatale, and if so, why does nearly everybody else here seem to know something Franck doesn't?

Regardless, the closer Franck comes to forbidden fruit, the less good it looks. On the occasions when he gets Mona into his car, Corneau shoots her from angles that emphasize her inappropriate age; later, she looks as flimsy as a child's doll.

On the night of the robbery, Franck seems to go out of his way to commit first-timer errors, and he wraps a mountain of wadded bills up in a rag as if begging a stiff breeze to blow them out of his hands. It's almost like he doesn't want any of the illicit pleasures being laid in his lap. Or maybe he just knows this isn't a world in which he'll ever be allowed to have them.