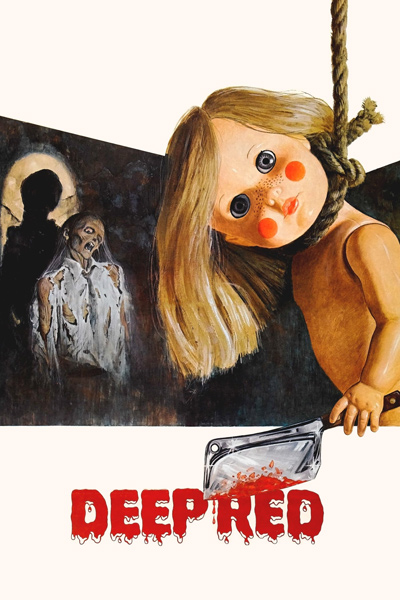 Deep Red is a transitional film from the middle of Dario Argento's most creative period, one that sees the Italian Hitchcock (better: the Italian De Palma) building surreal temples on Hitchcock's meticulous foundations before abandoning them--disastrously and without explanation--following the release of 1982's Tenebre. With little scholarship on Argento that's current and/or comprehensive, and with the director himself seldom asked about his steep decline, what's left is this notion that Argento wanted to escape the Hitchcock-derivative label (only to return to it after the spark had fled or, more likely, proved illusory all along), or that he wanted a psychic divorce from De Palma, whose career Argento's paralleled for a while in theme and execution. Whatever happened eventually, Argento in 1975 seemed to be casting about for a new direction. He'd just completed his "animal" trilogy of gialli (The Bird with the Crystal Plumage, The Cat O' Nine Tails, Four Flies on Grey Velvet) and nursed a belief that the genre had, if not run its course entirely, at least run its course for him. He dabbled in a failed period piece (Five Days in Milan), the function of which appears to be to demonstrate that Argento is no Sergio Leone (though to be fair, almost no one is Sergio Leone), and he contributed to a portmanteau for Italian television--a format to which he'd one day return with buddy George Romero and Two Evil Eyes.

And then he did Deep Red: one part giallo in its whodunit mystery and elaborate kill scenes; one part Mod in its casting of Blow-Up's David Hemmings as another artist involved in another existential knot at a cultural crossroads; and one part cross-eyed badger spit. There's a spirit of exploration in the picture that's new to Argento, a sense of liberation from the expectations of a genre already defined--maybe perfected, certainly never to be surpassed--by countryman Mario Bava, and it exudes a caution-to-the-wind confidence that would carry Argento through the next seven years and a quartet of films. Three masterpieces and a really good try (rank Inferno with stuff like Opera as second-tier Argento), as it happens, is enough to cement his legacy for all time despite the attempt of every Sleepless and The Card Player to demean it. Ultimately, I think it's fair to wonder whether Argento has as much to do with the success of the four movies (Deep Red, Suspiria, Inferno, Tenebre) he made during this time as some divine (and brief), Rilke-ian wind. Fair to wonder, too, how it is that the means towards artistic rebellion so often take the form of violent surrealism.

Deep Red sinks its fishhooks in from the start, baiting us with archetype in a Christmas tableau that's invaded by shadows in conflict, a stabbing motion, a knife dropped into extreme foreground, and a child's stockinged legs entering from right, suggesting that the perp is a little girl. It's a knife John Carpenter picks up three short years later in the prologue to his own salvo into the slasher genre, Halloween, this idea that the unseen antagonist--murderer, in fact--turns out to be a kid. (The truth is more oblique here.) The main titles draw to a close, and we're deposited in a theatre, watching a panel that includes a psychic (Macha Meril) who, after doing a parlour trick or two, freaks out and senses a murderer in the audience. Argento, because he's in control at this point and knows it, literally drops a pair of red curtains (vaginal lips as stage affectation) on the scene before inexplicably cutting away to water circling a drain, an image that will never again be innocuous post-Psycho. We see a table full of relics: a child's drawings of mayhem, marbles, dolls punctured with needles, clay figurines. Then a switchblade cuts into to an eyeball in extreme close-up. If you're keeping score, so far it's Psycho, Stage Fright, and a small, not-insignificant detour into Un chien andalou, maybe. Suddenly the psychic, with whom we've likely sutured as the presumed star of this show, is dispatched with a meat cleaver, in what will be one of several elaborately-staged, exquisitely gory death scenes. There are similarities, stark ones, to Brian De Palma's Dressed to Kill, from fashion of murder and garb to, if you must know, identity of killer; De Palma's film comes out five full years after this one.

On the late-night Roman street, we're introduced to the real hero, Marcus (Hemmings), who's soon standing in front of a broad borrow of Hopper's "Nighthawks at the Diner" painting. It's a reference that reveals Argento's self-consciousness--you could say pretentiousness (he'll do it again when Det. Gianna Brezzi introduces herself taking snapshots)--and paints in no uncertain strokes the film's obsessions with paintings and graven images as catalysts for (if not replacements of, or phantoms of) memory. The identity of the murderer, in fact, is revealed right there in the beginning, when Marcus rushes to the crime scene, although we won't know it until almost the end of the picture. It's the first of several moments in Deep Red where tricks of perception are being played--and a good example of why Argento became saddled with the "Italian Hitchcock" label.

Played by Daria Nicolodi, Argento's muse and lover in their first celluloid collaboration, Brezzi is one of the auteur's women investigators--woman racionators bridging the traditionally feminine role of intuitors (like our graphically-dispatched psychic) with the traditionally masculine role of perpetrator and discerner/judge/punisher. (It's a role that will be filled, in an uncomfortably Freudian turn of events, by daughter Asia in latter-day Argento.) Marcus immediately challenges Brezzi's gender's ability to do what she does, precipitating an arm-wrestling match that Brezzi wins (castration). Underscored by Marcus's visit to an actress's apartment (her wall of photos a dedication to her career in...why, pictures, of course) and then to her son, who's living with a beautiful transvestite, gender is a slippery thing in Argento, charges of misogyny being something he's had difficulty dodging to the point of appearing at the end to concede. But in this series of four films, Argento's vivisection of beautiful women and castration of men (he'll knock out a man's teeth in this one) serve a more subversively political purpose. At play in Deep Red are notions of identity tied with gender. It's no wonder that Carpenter took this film as chief inspiration, coding a virginal girl as the avatar for an audience of just-pubescent boys. The questions here are of spectatorship and power, n'est-ce pas? Explanation, then, for why we see the killer applying a thick outline of eyeliner before his/her acts. If you're still keeping score, this is the Vertigo moment; as Robin Wood described in his remarkable prologue to the last edition of Hitchcock Films Revisited, the way Wood continued to evolve in his reading of Vertigo corresponded with his own awakening to his sexuality. Eureka.

Deep Red brings the moment of sexual awakening to childhood, and Argento, as was his wont during this period, literalizes the motion with a child's nursery song. Throughout, too, symbols of penetration (knives, glass, knitting needles in a scene where a woman fends off an attacker--but not before she kills a pet bird (The Birds!)) merge with images of water, submersion, saliva, and, yes, menstruation. The second murder set-piece, taking place in a bathroom (Psycho), contains an especially brilliant bit involving condensation that initially comes off as one of those complex giallo knick-knack throwaways but plays directly into the leitmotif of uncovering things, unmasking others, and unearthing what was buried. Marcus describes the aspect of the second victim as "unnatural" and "pointing at a mirror," leading to something almost as tricky: Marcus's exhumation of a child's mural in a house identified by a guidebook ghost story. Argento after Tenebre (with arguably only moments of Opera the exception) could be accused of not knowing where to point a camera--of not being surreal so much as disorganized, some would say clueless. But it's thematically tight moments like this in Deep Red--like Marcus's suffering an eye injury immediately following his discovery of the hidden mural; like the set-up for the concluding death-by-necklace--that explain to some extent why so many fans forgive Argento's descent into cloudiness.