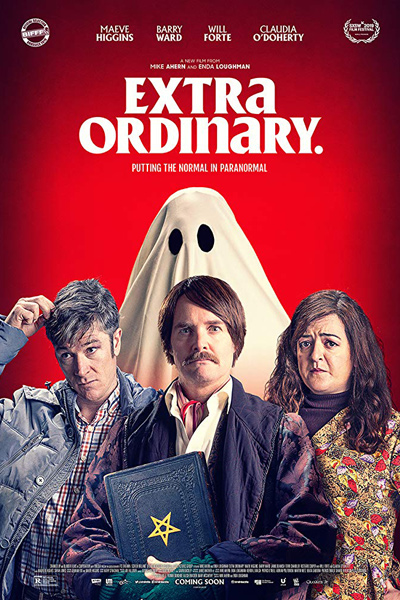 The unquiet spirit of Garth Marenghi’s Darkplace is revived by this outstandingly funny and good-natured horror-comedy: a cracking debut feature from Irish writer-directors Mike Ahern and Enda Loughman.

There are belting laughs and great performances, and, unlike so many Hollywood comedies, the funny stuff doesn’t bleed out as the plot grinds into action for the increasingly sentimental second and third acts. And, unlike some British indies, it never sacrifices comedy to the easier mannerism of being “dark”; it just keeps being funny while at the same time weirdly touching.

Maeve Higgins is tremendous as Rose, a gentle, shy soul: a driving instructor with the gift of exorcism, which she inherited from her celebrity paranormalist dad, who released a series of video guides to communicating with the beyond. (The clips from these are a joy.) However, she accidentally killed him while acting as his incompetent assistant in the middle of a ceremony to expel a demon from someone’s dog.

Convulsed with guilt, she has abandoned her supernatural vocation, but this all changes when someone needs his help: a nice, gentle widower, Martin (Barry Ward), haunted by the ghost of his stroppy late wife, and alienated from his teenage daughter Sarah (Emma Martin). To make matters worse, there is a washed-up American singing star who lives nearby, Christian Winter (played by 30 Rock’s Will Forte) who is a closet satanist. He needs to sacrifice a virgin so that the Evil One can make his new album a hit – and he’s got his eye on Sarah.

There’s pretty much a great line or visual gag for every minute of running time, some colossal “daemonic possession” acting from Ward. Plus there’s an outrageously orgasmic ending. A treat.