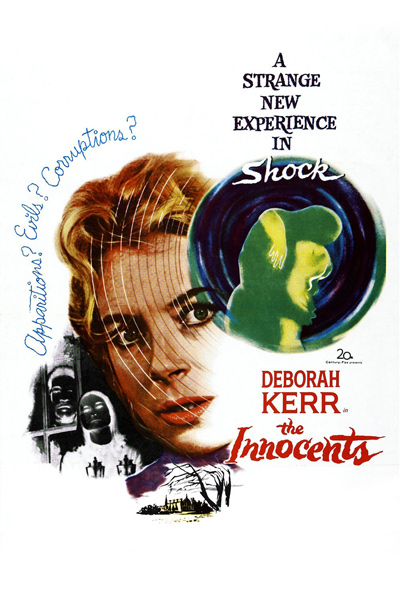 One of the great ghost stories in world literature, Henry James' 1898 novella, The Turn of the Screw, has been adapted countless times for the stage, television, cinema and even as a ballet, an opera (by Benjamin Britten in 1954) and a graphic novel (by Guido Crepax in 1989). Among the many film versions, however, most agree that The Innocents (1961), directed by Jack Clayton, is the most elegant, evocative and frightening of them all.

The screenplay by Truman Capote was actually based on the 1950 stage adaptation by William Archibald and may be one reason Henry James purists find fault with the 1961 film version. The story of a governess, Miss Giddens, who is entrusted with the care of two small children, Flora and Miles, by their uncle at a remote country estate, James' novella creates a mood of dread and menace through the increasing anxiety of Miss Giddens who suspects that the children may be influenced and corrupted by the malevolent spirits of the deceased former governess, Miss Jessel, and caretaker Peter Quint of Bly House. The beauty of The Turn of the Screw is that you are never sure whether Miss Giddens is imaging the supernatural occurrences or whether they are actually happening. In The Innocents, there is never any doubt that Bly House is haunted - you see the ghosts. Yet a sense of mystery and ambivalence still exists regarding the children. Are they conduits for the evil spirits or truly innocent? Miss Giddens' obsession with discovering the truth brings a feverish intensity to the proceedings which is almost as chilling as the phantoms she seeks to exorcise.

In Conversations with Capote, conducted by Lawrence Grobel, the author recalled his involvement on The Innocents: "When it was offered to me to do it as a film, I said yes instantly, without rereading it...Then I let several weeks go by before I reread it and then I got the shock of my life. Because Henry James had pulled a fantastic trick in this book: it doesn't stand up anywhere. It has no plot! He's just pretending this and this and that. It was like the little Dutch boy with his fingers trying to keep the water from flooding out - I kept building up more plot, more characters, more scenes. In the entire book there were only two scenes performable."

In the biography Deborah Kerr by Eric Braun, director Jack Clayton recalled how The Innocents and the casting of Deborah Kerr as Miss Giddens came about. "Deborah had one film to do for Twentieth Century [Fox], and so did I: that was the one we both wanted to do and which we had discussed when we met the previous year. I had admired her work in two films with that very underrated actor, Robert Mitchum - Heaven Knows, Mr. Allison [1957], which showed her at her best without makeup, and The Sundowners [1960], in which her freckles were so attractively in evidence."

Kerr remarked in the same biography on her performance: "I played it as if she were perfectly sane - whatever Jack wanted was fine; in my own mind, and following Henry James' writing in the original story, she was completely sane, but, because in my case the woman was younger and physically attractive - Flora Robson had played her wonderfully on the stage - it was quite possible that she was deeply frustrated, and it added another dimension that the whole thing could have been nurtured in her own imagination."

Filmed on locations in East Sussex, England and Shepperton Studios in Surrey, The Innocents proved to be a physically challenging role for Kerr. Clayton said, "To achieve what we wanted in the monochrome photography the arcs had to be of considerable intensity, and the atmosphere on the set, with fifteen "brutes" burning away, often stifling. During a long schedule, imprisoned in those voluminous Victorian dresses, she never complained, never showed a trace of the discomfort she had been feeling." She also had to do a scene that required numerous retakes where she had to carry Martin Stephens (who was cast as Miles) in her arms. She later revealed to the director that she had felt quite ill and feverish during that day of filming but never acknowledged it at the time.

Clayton discovered prior to production on The Innocents that the film needed to be shot in Cinemascope, a screen format he did not want to use. Luckily, he had one of the best cinematographers in the business working for him - Freddie Francis; they had previously collaborated on Room at the Top (1959). In The Horror People by John Brosnan, the cameraman recalled that, "...I had quite a lot of freedom, and I was able to influence the style of The Innocents. We worked out all sorts of things before the picture started, including special filters. I still think it was the best photography I've ever done - as much as I like Sons and Lovers [1960] I think The Innocents was better, but you rarely get an Academy Award for a film that isn't successful no matter how good your work on it."

As strange as it seems now, The Innocents didn't receive any Oscar® nominations. It did garner international awards such as a Best British Film nod from the BAFTA and a Palme d'Or nomination at the Cannes Film Festival. Still, the film was not a box office success in the U.S. Francis said, "I'm sure Jack [Clayton] was terribly disappointed with the reaction that The Innocents received. He, unfortunately, gets terribly tied up in his films. Everybody, I'm sure, involved with it thought it was a great picture and I'm not completely sure what went wrong but I think it was because it was based on Henry James. When you read James you've got to think about it and make up your own mind...The film lacked this ambiguity and I think, basically, that was the reason it wasn't a success...in the film all the suspicion fell on the children - whereas having read The Turn of the Screw one doesn't know whether it is the governess who is a bit strange or the children."

Deborah Kerr has her own theory about why The Innocents wasn't a success at the time. In the Braun biography, she noted "The subtlety with which he [Clayton] and his team established the atmosphere of the two worlds - the everyday and the spirit world - was so evocative of decadence, in the most delicate manner, that it completely escaped the majority of the critics. Today, a new generation of young movie "buffs" realize how extraordinary were the effects he achieved. One instance is the way the edges of the screen were just slightly out of focus, as though seen through a glass, perhaps. Now it is acclaimed as a great work of art; then they didn't push it because they didn't know how to respond to something so genuinely spooky - so interwoven with reality that it could be real - and that's something people didn't like."

Not all of the critics unfavorably compared The Innocents to Henry James's original novella. Pauline Kael of The New Yorker called the film "one of the most elegantly beautiful ghost movies ever made...The filmmakers concentrate on the virtuoso possibilities in the material, and the beauty of the images raises our terror to a higher plane than the simple fears of most ghost stories. There are great sequences (like one in a schoolroom) that work on the viewer's imagination and remain teasingly ambiguous."

Besides Clayton's superb direction, Francis's stunning cinematography and Kerr's masterful performance (possibly the best of her entire career), The Innocents is distinguished by an unforgettable supporting cast including Michael Redgrave in a brief opening cameo, Megs Jenkins as the fretful Mrs. Grose, Peter Wyngarde in a chilling, non-speaking role as Quint, Clytie Jessop, equally silent but haunting as Miss Jessel and two of the finest child actors of their generation - Martin Stephens as Miles and Pamela Franklin as Flora. Stephens had already made a strong impression as the blonde alien child leader in Village of the Damned (1960) but he would retire from acting in 1966 and pursue an education in architecture. Franklin would go on to star in other similar genre efforts such as The Nanny (1965), And Soon the Darkness (1970), Necromancy (1972), The Legend of Hell House (1973) and The Food of the Gods (1976).

Among the other notable adaptations of Henry James's The Turn of the Screw are numerous television productions including a 1959 version with Ingrid Bergman (directed by John Frankenheimer), one in 1974 with Lynn Redgrave (directed by Dan Curtis), one in 1995 entitled The Haunting of Helen Walker with Valerie Bertinelli, Michael Gough and Diana Rigg, and one in 1999 with Jodhi May and Colin Firth. Film versions of the novella include the 1985 Spanish film Otra vuelta de tuerca, directed by Eloy de la Iglesia (Cannibal Man, 1973), The Turn of the Screw (1992) with Patsy Kensit, Stephane Audran, and Julian Sands, Presence of Mind (1999) with Sadie Frost, In a Dark Place (2006) with Leelee Sobieski, and even a prequel to the events in the James story entitled The Nightcomers (1971), a kinky S&M portrayal of Quint and Miss Jessel played by Marlon Brando and Stephanie Beacham. None of them appear to have the fervent cult following of The Innocents which looks better and better with each passing year.