A searing examination of the unrelenting Chechen conflict 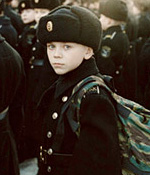 Prijo Honkasalo's elegiac documentary depicting the lives of children victimized by the Chechen conflict achieves its power largely through images. Composed of three nearly wordless chapters, "The 3 Rooms of Melancholia" superbly conveys its themes of despair and lost opportunities. The beautifully photographed film, an award winner at numerous festivals, is receiving its U.S. theatrical premiere at New York's Film Forum.

The first section, "Longing," deals with the Kronstadt Cadet Academy, a military school near St. Petersburg populated by about 600 students, some as young as 9 years old. The second section, "Breathing," is an impressionistic portrait of Grozny, the Chechen capital, a city reduced to rubble and ruin by the endless fighting. The climactic section, "Remembering," presents portrait of various children in orphanages and refugee camps, including a young woman who was raped by Russian soldiers at the age of 12 and a boy who was found living in a cardboard box.

Featuring a haunting musical score by Sanna Solmenkallio, the film concentrates heavily on lingering close-ups of the suffering children's faces, as well as numerous lengthy shots of the stark landscapes. Although these images have an undeniably unsettling power, they do tend to lose impact with repetition, and the film would gain power with some judicious cutting. Nonetheless, it is a pertinent reminder of the timeless horrors of war. (F. Scheck, Hollywood Reporter)