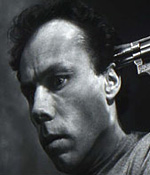 Shot like the grunge version of a '50s noir thriller from France (or Soviet Georgia), the black-and-white "13 (Tzameti)" turns into a shocker of Tarantino proportions in protracted sequences of explosive violence that leave viewers quaking. The difference is that there is nothing tongue in cheek about the surreal physical and psychological violence here, which is about as pleasurable to watch as a dog fight. Still the forceful images linger in the memory, making it likely that whatever pic's small commercial fortune on Euro art screens, talented first-time helmer Gela Babluani will be heard from again.

Sebastien (George Babluani), a clean-faced 20-year-old who lives in dire straits with his immigrant family, is hired to repair the roof of the morphine-addicted Godon (Philippe Passon). The old man dies before Sebastien can be paid, but not before the boy overhears a conversation that seems to promise easy money. He impulsively decides he will follow the instructions meant for Godon and see where they lead him.

It's a promising premise and well-accompanied by an atmosphere of threatening mystery. Once Sebastien steps on a train with his filched first-class ticket, events start moving quickly. Unbeknown to him, the police are following his every move -- but why?

The director -- son of well-known Georgian helmer Temur Babluani -- has absorbed a lot from classic East European cinema, including a feeling for eerie faces and images, and a knack for building tension. He is fortunate to apply his gifts to Sabine Bauchart's quite original screenplay, which might be a candidate for a remake. Tariel Meliava's B&W cinematography has a stark brutality that brings the old Georgian cinema to mind, as do the faces of just about every member of the cast. A score by East (Troublemakers) pumps up the tension, making it useless to close your eyes. (D. Young, Variety)