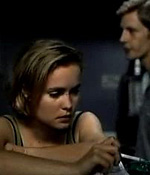 Drugs. Lesbians. Nudity. Steady on lads, this ain't no Russ Meyer renaissance, this is High Art, an emotional trek into the hearts and minds of an impressionable young photography fan and an older, reclusive artiste who has shut herself out of the art world and locked into a drug-riddled semi-existence.

When Syd (Mitchell who played Frances O'Connor's gal pal in Love And Other Catastrophes) ventures away from her mind numbing boyfriend's apartment and discovers a new exciting world upstairs, she befriends hermit hippy photographer Lucy (Sheedy from The Breakfast Club, St Elmo's Fire) and tries to coax her back into the mainstream art world. Syd and Lucy become fascinated with one another. Lucy feeds off Syd's excitement and passion, while Syd is entranced by Lucy's artistry and experience in life.

High Art is bound to be hit or miss with the audience. Exploring bisexuality won't be everyone's cup of double decaf, but with an open and patient mind this film is worth your time. (C. Parry, eFilmCritic)