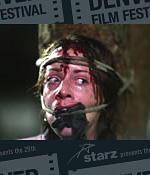 As if team-building retreats weren’t hellish enough, imagine stumbling into the wrong lodge and finding yourself surrounded by some sort of mysterious, psychotic force. Add in the revenge factor — the retreat is for employees of a weapons manufacturer with a history of shady dealings and lots of enemies — and you’ve got a recipe for some creative bloodshed. Severance opens with six workers from the Palisades Defense Company riding their luxury tour bus toward a posh resort in a Hungarian forest. The group includes an inept, catchphrase-spouting manager (Tim McInnerny, who has more than a passing resemblance to John Cleese), a nerdy IT guy (Andy Nyman), a pretty administrator (Laura Harris) and a magic mushroom-chewing stoner (Danny Dyer). After finding the main road blocked, the six begin walking through some very eerie woods on their way to the lodge. But the rundown place they discover – could it possibly be the right building? By nightfall, they all have their own creepy ideas about where they are. The BBC describes Severance as “The Office meets Deliverance… a slick mix of satire and splatter,” and writer-director Chris Smith focused his energy on creating a smart script, building a plausible back story and dreaming up scenes that would terrorize even hardcore horror fans. And, while it’s rare to praise the performances in a horror film (who can evaluate the actor beneath a hockey mask?), Severance is filled with good ones, especially from Dyer and Harris. Outrageously funny, unashamedly grisly and frequently terrifying, this is one of the most effective slasher films yet. We can only hope it signals a new era where on-screen bloodletting is combined with astute political commentary, sparkling dialogue and a multi-dimensional story arc. Severance may not suit viewers with queasy stomachs, but it’ll charm even those who usually turn their noses up at cheap cinematic thrills.