The Sequel to Election 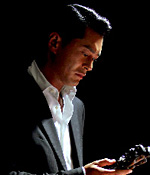 To's Hong Kong crime opera "Triad Election," a film-festival fave-rave that's taken a mysteriously long time to reach American audiences, is known as "Election 2" in the rest of the world. It is a sequel featuring many of the same H.K. underworld characters, but it's altogether a darker and chillier affair, merciless in tone and existentially claustrophobic, which for all its stylishness never romanticizes these soulless lowlifes.

In telling the story of Jimmy (played by Chinese-language pop idol Louis Koo), a smooth-talkin', sharply dressed operator who's coerced into taking over Hong Kong's most notorious triad society by his "legitimate" business connections on the mainland, To is partly repurposing the later chapters of Michael Corleone's career from "The Godfather, Part III." But the portrait To paints of relations between Chinese state capitalism and Hong Kong organized crime, a decade after the former British colony was returned to mainland control, could scarcely be bleaker.

Conventions of honor, order and patriarchy have been swept aside, even among the ancient triads. In the new China's acquisitive, entrepreneurial culture, a life of crime is much like any other business, with slightly more killing, yet To keeps the flow of assassinations, backroom intrigue and elegant lifestyle accoutrements rolling onward with deceptive ease.

"Triad Election" is something like a surprise candy, with a hard, sweet veneer and a shockingly bitter center. If John Woo's now-classic films of the late '80s and early '90s ("A Better Tomorrow," "Bullet in the Head," "Hard-Boiled") represented the baroque height of Chinese crime cinema, the veteran To -- who has made nearly 50 films in the last 27 years -- now rules the roost with a less lyrical, more cynical vision. Woo's heroes were often noble, even Christ-like knights, sacrificing themselves to a cruel system on behalf of the innocents they loved. In To's movies no one is innocent, and the social corruption has reached down to the soul. He orchestrates action scenes with an elegance that suggests Scorsese, but it's no accident that in the movie's grotesque and nearly unwatchable centerpiece Jimmy soaks his fancy suit with blood. (A. O'Hehir, Salon.com)