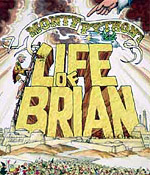 This Monty Python film was banned in many countries for blasphemy and remains, to this day, as relevant (and hilarious) as ever. It features the Pythons in peak form. Please arrive early as, once we have reached capacity, we have to lock the doors for security reasons.

Check out The Secret Life of Brian (on YouTube), a documentary, an excellent companion piece to tonight's film.