The World Bank on Trial 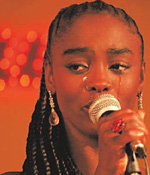 Much of "Bamako" is set in the fly-ridden courtyard of a residential building in Mali, where a mock trial is being conducted by lawyers and judges in formal robes to decide the responsibility of the World Bank and other Western institutions for Africa's impoverishment. Trial movies can be painful, but "Bamako" is a powerful polemic leavened with moments of beauty and humor.

Director Abderrahmane Sissako opens the proceedings by intercutting scenes from the lives of those living in and around the building, particularly a young singer (Aïssa Maïga) who is having trouble with her husband. There are shots of an ailing man lying in bed, of female workers dying fabric and of a wedding party that marches through the courtyard. Repeated sequences focus on a court guard who takes his duties very seriously.

The lives of those affected by the issues formally examined by the court go on right beneath the noses of the bewigged debaters.

In fact, the trial turns out to be pretty one-sided: the International Monetary Fund and other creditor groups take a serious verbal beating. Some of the best scenes involve fiery oratory on the part of attorneys and witnesses, both black and white, denouncing those they hold accountable for poverty and suffering on a wide scale. Particularly impressive are speeches by Aïssata Tall Sall and William Bourdon as advocates for the plaintiffs, and a long harangue that isn't even subtitled -- the intensity of the speaker's delivery tells us all we need to know.

Sissako provides humorous, surreal commentary on his theme by including a short film-within-a-film, an African spaghetti Western called "Death in Timbukto" that features Danny Glover (one of "Bamako's" executive producers). But the comic mood ends when we see that this bloody shoot-'em-up draws laughs from its African viewers. It's a chilling touch, as is the remark by a character who is a cameraman and recounts that he prefers to shoot pictures of corpses, because they are "more real" than the living. (W. Addiego, San Francisco Chronicle)