An Immigrant Boy Finds His Father -- And His Impostor 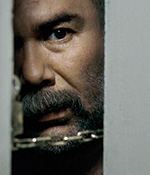 Thriller centered on a Mexican boy who smuggles himself to Brooklyn to meet his long-lost father, only to find his identity has already been stolen by another young man who seeks to steal the father's fortune. Grand Jury Prize winner at 2007 Sundance Film Festival.

Christopher Zalla's "Sangre de Mi Sangre" (Blood of My Blood) is a great, impassioned immigrant odyssey in which the desperation of illegal immigrants to make it across the Mexico border at any cost drives a compelling, suspenseful fable of innocence and betrayal. Juan (Armando Hernández) and Pedro (Jorge Adrián Espindola) arrive in New York City in a tractor-trailer packed with undocumented immigrants. Naive Pedro has shown his cunning new friend a sealed letter from his mother that is to serve as a letter of introduction to the father he never knew, whom he believes to be the prosperous proprietor of a French restaurant. Pedro awakens to find that Juan has stolen his belongings along with the precious letter. Assuming Pedro's identity, Juan discovers that Pedro's father Diego (Jesús Ochoa) is but a restaurant kitchen worker who rejects him outright, letter or no letter. But Juan, a con man as facile as he is desperate, displays a terrier's tenacity in his determination to attach himself to Diego. In the meantime, the sweetly feckless Pedro tries to latch on to the coke-sniffing street prostitute Magda (Paola Mendoza) for help in finding his father. Shot mainly in New York's meanest, murkiest streets, "Sangre de Mi Sangre," is intricately and imaginatively structured, building to a powerful climax of complex irony.