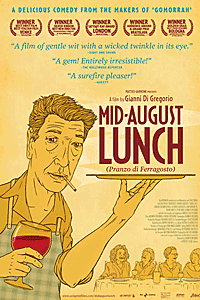 As satisfying as a long, lazy afternoon meal, Mid-August Lunch is a simple and endlessly charming look at a weekend in the life of an uncomplicated middle-aged man living with his aging mama.

Written and directed by Gianni di Gregorio, who also stars, the movie is as far removed as humanly possible from his last screen job, co-writing the script for award-winning violent Italian gangster drama Gomorrah.

An apron tied around his waist, baggy eyes squinting from the smoke of an ever-present cigarette and a glass of wine never far from his elbow, Gianni and his widowed mother (94-year-old Valeria De Franciscis) share a faded apartment in Rome. (The flat is actually Gianni’s home.)

The money they once had is all but gone and Gianni, always with a tired and resigned look about him, spends his days cooking and cleaning, looking after the house and his mama. Daily errands often involve a stop at the local grocery store/tavern to share a glass of vino with his best friend, Viking.

Mama is getting on, her thin face marked with spots and her wig often askew. But there’s something still grand about her and she loves her boy as he dotes on her, carefully making special meals and seeing to her comfort.

(As an aside, eat before you see Mid-August Lunch. Like other great Italian foodie flicks, this one will leave you ravenous and desperate for pasta, chunks of cheese, chilled wine and platters of thinly shaved mortadella.)

With money so tight, Gianni reluctantly agrees to look after the condominium manager’s elderly mother over the upcoming holiday weekend when he promises to forgive some debts. What choice does he have? But the condo manager has another angle and shows up not just with his demanding mama, but his elderly aunt as well, leaving Gianni to play Switzerland among the strong-willed women in his home, who naturally don’t get along.

De Franciscis is lovely as the faded aristocrat who would never stoop so low as to actually argue with a guest while she is quietly seething inside. And all the while poor Gianni, hangdog expression always in place, struggles to keep the peace as his blood pressure rises. But all this takes a physical toll and he calls the doctor to pay a house call. He’s given a once-over — and asked if he could look after the doctor’s elderly mother over the long weekend. And by the way, mama has a very long list of dietary restrictions.

The women square off like territorial alley cats with poor Gianni, forced to give up his bed to sleep on a folding chair on the terrace, counting the hours until pickup time.

But life doesn’t always take a predictable path and with Gianni and his guests sharing a passion for the joys of the table, perhaps there is a common meeting ground.

Beautifully shot along ancient streets, the movie delights with simplicity and gentle humour (the women who play the unwanted guests are not actresses, but real people). It’s not surprising to learn that Gianni based it on his own life as the son of a widowed mother who was indeed asked to take in his condo manager’s mama over the August holiday weekend. He turned him down and his vision of “what if” gives Mid-August Lunch its playful reality.