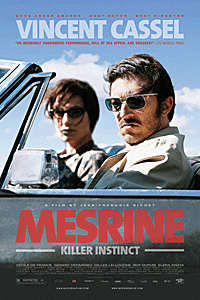 Jacques Mesrine is to France what Mark ‘Chopper’ Reid is to Australia – times a thousand. The man branded ‘Public Enemy Number One’ by the French authorities escaped from maximum-security jails (three times, no less) and even from his very own trial (by taking the judge hostage). Or so the story goes. ).

Director Jean-Francois Richet (Assault on Precinct 13) makes it perfectly clear from the outset that this exhilarating tale is an interpretation of events – and takes much of its inspiration from the infamous gangster’s memoirs (like Chopper, Mesrine penned his Killer Instinct tome behind bars). ).

Unlike Steven Soderbergh’s recent Ché – or Tarantino’s Kill Bills, for that matter – the two parts here fit seamlessly together, with Richet never letting the tension lag, even for a second. ).

Split-screen emphasises 1970s crime period detail and style – and grainy, handheld reportage the shocking aftermath of one particular traffic incident. This, together with a highly unorthodox approach to the telling of the story – key scenes, such as Mesrine’s wedding and a bank job gone wrong, are not featured – keeps the thing racing along at breakneck speed. It’s as if Richet is telling us: 'There’s no time to waste – so if we’re not interested, it’s not in the film'. It is a bold lesson in storytelling – a bonafide rewriting of the rulebook. ).

The other key ingredient to Richet’s astounding film is, of course, his leading man. Vincent Cassel delivers a powerhouse performance as the godfather of crime, portraying the charming monster with the perfect blend of swagger, wit and muddled moral depravity, as he loses people faster than you can say, “Non, merci”. It makes his breakout turn in La Haine look like a pre-school class. ).

While this is undoubtedly Cassel’s film (an ensemble piece, a la Scorsese, it is not), he’s ably supported by a modern who’s who of French cinema: a huge Gerard Depardieu as his crime boss mentor; Cecile de France as his soul-mate crime partner lover; and The Quantum of Solace’s Mathieu Amalric, as a fellow escapee accomplice. It’s no coincidence that it quickly garnered nods for a record-breaking 10 Cesars (French Oscar), winning three (for Cassel, Richet, and sound). ).

So let’s emphasise the point here: Mesrine is, without doubt, the finest crime film in years, if not decades. And yes, that includes Goodfellas.

Jaw-droppingly brilliant. Cassel is at the very top of his game and Richet has raised the bar a dozen notches for those brave enough to now attempt a crime film of any kind. Genius, here at least, comes in two parts. Do not miss this film.