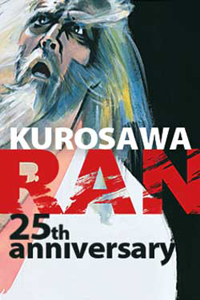 They don't make them like Akira Kurosawa's magisterial "Ran" anymore, but the truth is, they didn't really make them like this regal epic back then either.

It is the picture's 25th anniversary as well as the centennial of the director's birth, "Ran" reminds us what a singular gift director Kurosawa had. His films stood out from the crowd then, and they do even more so now.

Inspired by Shakespeare's "King Lear" in the same way Kurosawa's "Throne of Blood" was influenced by "Macbeth," "Ran" was the rare foreign language film to not only get multiple Oscar nominations, including best director, but to actually take home a statuette (for costume design).

Kurosawa was attracted to tales from Shakespeare because they suited his particular gifts as a filmmaker. What's remarkable about "Ran" is that the drama enhances the spectacle the same way the spectacle bolsters the drama. Few other directors had Kurosawa's ability to convey the intimate as well as the epic, to handle stillness as well as violence. ).

"Ran" (the title means "chaos" or "turmoil") is set during the constant warfare of 16th century Japan. The Lear-type figure is Hidetora, referred to as the Great Lord and convincingly played not by Kurosawa regular Toshiro Mifune but by the protean Tatsuya Nakadai, a bad guy in "Yojimbo" and "Sanjuro," and an unforgettable psychotic killer in "Sword of Doom." ).

Nakadai's graybeard Hidetora is introduced at the top of his game, every inch the aristocratic warrior as he intently draws back an arrow during a boar hunt. At the lunch after the hunt, however, he reveals his 70-something age by dozing off and soon after he makes a surprise announcement: He's going to divide his kingdom and its three castles among his three sons. ).

Only one son, the blunt and forthright Saburo (Daisuke Ryu), speaks his mind, calling the plan downright foolish and getting banished for his trouble. As "Ran" unfolds slowly but inexorably over its 2 hours, 42 minutes, we gradually see how right he was. ).

In addition to changing Lear's daughters to Hidetora's sons, "Ran" makes interesting modifications to the story. For one thing, it takes pains to give Hidetora a specific back story of bloodshed and destruction that poisons his plans. ).

For another, Kurosawa and co-screenwriters Hideo Oguni and Masato Ide create the spectacularly chilling character of Lady Kaede (Mieko Harada), the wife of Hidetora's eldest son, a seductive schemer who has issues of her own with her husband's family and no compunction about seeking revenge. ).

A fascination with this kind of psychological portraiture was one of Kurosawa's strengths from Day 1. How people act, their motivations and character traits, are of primary importance here. It's the bond that holds "Ran" together and makes protagonists from this long-ago world accessible to us today. ).

What people remember most about "Ran," however, are its bravura visuals, the detailed way Kurosawa and his team created this specific milieu. The director had each of half a dozen competing armies color-coded in terms of their gear, and Oscar-winning costume designer Emi Wada spent three years creating 1,400 costumes. Kurosawa mandated that authentic-to-the-16th century weaving and dying techniques be used, not blinking when it added $1 million to the budget. ).

The centerpiece of the film is a six-minute battle scene daringly conceived with no sound or dialogue on the soundtrack, only Toru Takemitsu's unnerving score. The action is choreographed and shot with such unnerving skill by Kurosawa's trio of Oscar-nominated cinematographers -- Takao Saito, Mashaharu Ueda and Asakazu Nakai -- that we feel both immersed in the battle and an eavesdropper on reality. It doesn't get better than that.