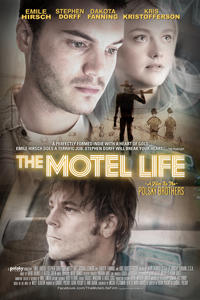 Based on the popular novel by Willy Vlautin, THE MOTEL LIFE is a searing and profound examination of brotherhood set in the timeless Sierra Nevadan frontier. Frank (Emile Hirsch) and Jerry Lee Flannigan (Stephen Dorff) work odd jobs, drink hard, and drift from motel to motel. Their only escape is through Frank’s fantastic stories and Jerry Lee’s rich illustrations. Everything changes when Jerry Lee is involved in a hit-and-run accident, which forces the brothers across the state to the home of Frank’s old flame, Annie (Dakota Fanning). While the two seem safe from the law, Jerry Lee’s insatiability and all-consuming guilt render their future increasingly uncertain. Like an outlaw country song, this directorial debut from real-life brothers Gabe & Alan Polsky finds beauty and hope in a world of casinos, gun shops, dive bars, and in the simple people who inhabit them. The film features animation by Mike Smith.