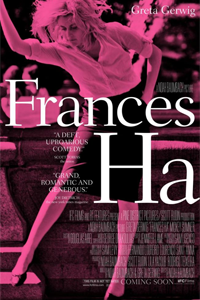 If pain is a reliable measure of truth, then Frances, the protagonist of Noah Baumbach’s new film, “Frances Ha” (played by Greta Gerwig, who also co-wrote it)—who sets herself adrift in the stream of time and gets caught in a waterfall—is utterly dans le vrai. Frances is a twenty-seven-year-old woman, originally from California, who starts out in Brooklyn (her changing addresses, in the form of title cards, punctuate the movie throughout) as an apprentice dancer in a small company where she’s aspiring to full membership. Instead, she gets dropped from its roster, and her life goes into a sudden downward cascade.

Frances starts the movie with a breakup with a boyfriend, ostensibly due to her obligation to her roommate and best friend since college, Sophie (Mickey Sumner), but the breakup seems trivial beside the fluctuations in that friendship. Sophie, who is a rising star in book publishing, is making a little money and dating a man—a Wall Street analyst—who is making a lot of it, and she soon accepts an offer to move into a nice apartment in Tribeca, which Frances can’t afford. As a result, Frances—with a few crash stops along the way—becomes, in effect, homeless at the same time as she is unemployed, artistically unmoored, and friendless.

Yet, throughout the movie, Frances wears a smile and carries herself with a blithe bounce that contrasts sharply with her actual situation, as if to mask her agony. She can’t bring herself to complain, to admit her troubles, or to take much action to remedy them. As closed-mouthedly as possible, she grabs at whatever rung she can lay hold of while in free fall. Her solitude is both her refuge and her treasure; her despair conceals her intimation of greatness, her sense of being destined for big things. “Frances Ha,” underneath its more or less familiar variety of New York indie-world story, is a complex construct, both in what the movie shows and in what it doesn’t, in its narrative construction and in its convergence with life offscreen.

The offscreen life is that of Gerwig, who started out in ultra-low-budget independent films, got called to Hollywood, where, though underemployed and misemployed, she extended her range, astonished in Whit Stillman’s “Damsels in Distress,” and now has an entirely justified and deserved esteem and prominence. Her trajectory resembles what Frances believes she is destined for; that secret is what causes Frances to smile throughout the movie, what renders her confident in the face of all deflating evidence, and what renders the very tone of the movie surprisingly chipper.

Frances’s persona converges with that of Gerwig—a woman whose circumstances can’t mask her ineffably appealing idiosyncrasies and the depth of character that they reflect. Frances is drastically different from everyone else (Robert Bresson once said that an artist is simply someone who’s unable to do things the way that everyone else does them), and her differences—her way of speaking, her gestures, her sense of timing, and her very willingness to face her fate down to its bedrock of misery—can’t conceal the fact that she is in fact marked for success. The unexpressed secret is only the first of the gaps around which the movie is constructed; another is the gap between Frances’s nonachievement and Gerwig’s accomplishments.

For instance, one of the young men (Michael Zegen) in the Chinatown boho “rich boy” apartment where Frances crashes—an aspiring TV comedy writer who spends more time at the movies and hanging out than at his laptop—endlessly jokes that her idiosyncratic habits of mind and independent temperament make her “undateable.” The joke concealed in the term is that it’s in fact Frances who renders herself untouchable by the homunculi of her own circle, because she is a woman of destiny awaiting a Prince Charming of a similar grandeur of character.

“Frances Ha” is built of the stuff of classic-modern ultra-low-budget independent films (such as Joe Swanberg’s “Hannah Takes the Stairs,” Gerwig’s first great showcase), the essential subject of which is the ambitions and frustrations of young liberal-arts and creative types whose work and lives tensely intermingle. “Frances Ha” ultimately leaves its protagonist better off than she started, and does so in a sort of tag ending that implies—in a single cut from one shot, of rock-bottom desperation, to another, of practical improvement—an entire film of fulfilled ambition that, here, couldn’t be made, because it would imply Gerwig’s own autobiography.

Frances, who is no longer a dancer, takes the first step in becoming a choreographer, but the movie glosses over all that goes into the making of the show—the working, the casting, the exigencies of the day job she holds meanwhile, the need to work “Nights and Weekends” (the title of a movie that she and Swanberg co-directed and co-starred in, from 2008), the relationships that develop or that fail in the making of the work—that’s the classic-independent film that would bubble up from the cut, the missing hour of “Frances Ha.”

Where the classic-modern independent film is implicitly autobiographical, “Frances Ha” is a movie that draws on this tradition to depart from it. In effect, “Frances Ha,” with its conspicuous artifice—the conspicuous chirpiness and facile typology of the people in Frances’s circle, the highly constructed and hermetic indie-world in which she lives—is like “Charlie Parker with Strings.” Rather than playing with soloists in a small group of equals and who spark her to flights of spontaneous and extravagant invention, Frances is set off as a soloist by the non-spontaneous, schematic, and somewhat impersonal arrangements that emphasize romantic urbanity and bring the extreme modes of expression to an audience that isn’t necessarily down with the style. Baumbach and Gerwig, like Parker in his time, bring their emotions, moods, and methods on to a broader stage. It isn’t just a matter of popularization; it’s also a matter of transcending style in yet another creative act of self-definition.

Gerwig may be famed for acting like a nonactor, but she’s an extraordinarily accomplished actor (as she proved in “Damsels in Distress”), and here she puts the movie on her back and carries it from beginning to end, combining the spontaneous inspiration and personal presence of her earlier films with the constructed performance of “Damsels.” The “arrangements” (in this case, the script and its directorial adornments), put her in front, as a soloist.

Baumbach anchors “Frances Ha” in the iconography of the French New Wave and its successors. He makes the film in black and white; adorns it with music from Truffaut’s films (such as the twangy theme from “A Gorgeous Girl Like Me”); and remakes an iconic scene from Leos Carax’s “Bad Blood” with the same music, David Bowie’s “Modern Love.” Even the title is a New Wave reference: characters in Jean-Luc Godard’s “Made in U.S.A.” make frequent reference to someone whose last name is never heard in its entirety but is blasted over by dubbed-in gunshots, ringing phones, or horn honks: “Richard Po—”

The New Wave may be the enduring model for the personal cinema and signifier of directorial inspiration, but it’s also a movement of a non-academic neo-classicism. For Baumbach, the modern classics of French cinema, from Truffaut and Godard to Carax, play a role akin to the one that the films of Alfred Hitchcock, Howard Hawks, Fritz Lang, and Nicholas Ray played for the New Wave directors: the idea that one films one’s own life and thoughts in terms of the movies one loves. Baumbach is adding his own movie love to the formula of the independent cinema, borrowing that movement’s core concerns while building on a different, and—by implication—more solid foundation of cinematic experience. That’s how he writes himself into the story and implies that it is also his own. What’s more, the New Wave also signifies a cinema of youth, both of directors and of a generation of actors, whose very manner became a new kind of stardom.

In Carax’s “Bad Blood,” when Denis Lavant (himself one of the great new stars of the modern French cinema) runs through the streets to the tune of “Modern Love,” he does so with a self-punishing fury that is itself a part of his ecstasy, pounding his stomach and mixing his romantic joy with romantic agony. In Baumbach’s version of the scene, which is utterly detached from romance, Gerwig runs with an uninhibitedly sunny smile, her pain allayed and her joy unfettered. As Frances endures unexpected defeats and humiliations, she is nonetheless engaged in that most classical and univocal mission, the pursuit of happiness—and the happiness that she achieves is the second movie implicit in “Frances Ha.”

It would be a difficult movie to make, in part because of the very notion (common on the part of critics) that “critique” is a higher and more moral order of activity than the exertion and display of creative power. That story even presumes a sort of aristocracy of spirit, which is, of course, exactly what the movie itself depends upon. Until now, Baumbach has been the poet of bile; “Margot at the Wedding” and “Greenberg,” two great achievements, suggest a filmmaker in conflict with his abilities, his dreams, his nearest and dearest, and his times, who nonetheless secretly enjoys cutting loose with his dark discontent. “Frances Ha” evokes despair without bile because, far from being in conflict with her world, Frances is simply apart from her world, out in front of it—and secretly aware of it. In cutting himself off from his acerbic anger, Baumbach has risked cutting himself off from his greatest source of inspiration. Fortunately, in Gerwig’s collaboration, he has found another source; he puts aside his own dialectical exceptionalism—alternately that of the insider fighting to get out and the outsider struggling to get in—for her secular state of grace.

Frances’s elided second story—that of her rebound as, fresh from the success of her dance production, she begins to make her way into the professional world, attracts press clips and investors, sees herself detached from many of the practical worries that she had formerly faced, and confronts a new range of concerns, from managing her relations with journalists to employing dancers who formerly had been her peers—is the story of Gerwig and Baumbach’s own lives. It would be nearly impossible to film—it would risk pride, vanity, self-satisfaction, and self-pity—and therefore would also be the greater achievement.